Unfortunately for him, he drew a seat with live cash game crusher Garrett Adelstein on his left.

The two well-known players clashed in a few hands throughout the night, but this article/video focuses on the most notable one.

Watch the hand below with analysis from Upswing Lab coach Gary “GazzyB123” Blackwood. You can also read on for a written recap of the hand with Gary’s analysis transcribed.

Garrett’s 3-bet sizing and hand selection look good — this is clearly his best course of action in his position with T9s — so let’s head to the flop!

Note: Want to know how to play every hand in every common preflop situation? Get instant access to extensive preflop charts and lessons (for cash games, heads-up, and tournaments) when you join the Upswing Lab training course. Lock your seat now!

This is a pretty good flop for Garrett’s hand. The question is whether he should check or bet.

Boards with two broadway cards are generally good for the preflop 3-bettor. However, in this case, there is already a completed straight possibility on the flop. This means Garrett will need to be checking a lot more often with the heart of his value range (overpairs) than he would on a dryer board.

All in all, T♠ 9♠ works great as a check-call hand, though betting small wouldn’t be a bad play.

This is certainly a board on which the vlogger should both bluff and value-bet fairly widely. For that reason, I generally would like to see a size no bigger than half-pot most of the time. (Remember, the rule-of-thumb is that as your value-betting range gets wider, the smaller your bet sizing needs to be.)

Sizing aside, the major mistake Rampage makes on this flop is his hand selection. His hand has no direct outs to improve to a strong hand and is simply not good enough to bluff.

When bluffing on the flop, you usually shouldn’t pick hands that have virtually no equity to improve. Rampage has plenty of better bluffing candidates — e.g. a ton of strong straight-draws (AK, AQ, KQ, K9, A9) plus a ton of flopped flush-draws.

Keep in mind that just because he checks back with a weak hand doesn’t mean he is giving up on the pot. Combos with no equity can still be bluffed on later streets, capturing expected value (EV) that way.

Given how the action has gone thus far, Garrett’s straight is pretty well disguised. He should expect Rampage to continue to bet a somewhat wide range of hands, including a lot of bluffs that are trying to force folds from overpairs and drawing hands.

Now that Rampage has turned equity, continuing to bluff makes the most sense. A 66% pot-sized bet is a great choice as it allows him to bet a bunch of value hands (two pair and better) while also putting a ton of pressure on Garrett with his bluffs.

Garrett has an obvious check-call on the river against any non-overbet size. It’s Rampage who has to make a tough choice.

All in all, Rampage’s decision to put in a big bet on the river is great for two reasons:

1. 5-high is at the absolute bottom of his range, which is a key attribute of a hand that should bluff on the river.

When constructing a river bluffing range, it’s best to start with the very bottom of your range and then incrementally add in more bluffs depending on your bet sizing and how many value hands we have.

2. 5♥ 4♥ is one of the best bluffing combos on this river because it entirely unblocks all of the hands Rampage is hoping to fold out. A hand like A♦ Q♦, by contrast, is a much worse bluffing hand because it blocks many of “probably folding” hands Rampage hopes Garrett has — e.g. overpairs (AA, QQ) and missed flush draws (A♦ X♦, K♦ Q♦, etc).

This hand really illustrates how important the concepts of proper hand selection and board coverage are in No Limit Hold’em.

Garrett’s success in this hand starts with correctly 3-betting T♠ 9♠ preflop, which allows him to have great board coverage on flops like J-T-8.

On the flop, Garrett wisely checks, protecting his range in case his opponent barrels off on turns/rivers that happen to give him a straight. This series of smart plays is what led to this successful trap.

Rampage’s sloppy combo choice on the flop wound up costing him the maximum in this hand, despite the fact that he played the other 3 streets perfectly. As we saw from this hand, over-bluffing, while effective against some nitty opponents, can be disastrous against a smart and balanced opponent like Garrett.

What Do You Think of Rampage’s Plays in This Hand? What About Garrett’s?

As always, if you are interested in even more in-depth hand analysis and strategy lessons that will help your game, check out Gary Blackwood’s modules in the Upswing Lab! 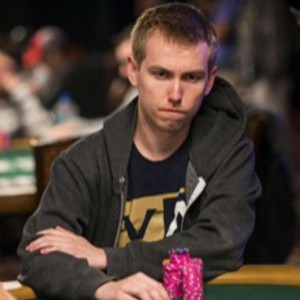