Raise your hand if you feel like every time you 3-bet with AK, the flop brings three undercards.

3-bet pots are common, but the amount of money involved from the get-go makes things a bit more tense.

Today we will try to ease that tension by explaining how to proceed on a pretty common board texture once your 3-bet gets called.

The focus will be on a specific board (T-8-6) that came during a hand played by Upswing coach Fried Meulders. Heads-up: the analysis gets quite advanced.

In general, how to continue on the flop in most spots is heavily based on a very simple and powerful principle: range advantage.

Range advantage refers to when your range has more equity than your opponent’s range. This is not to be confused with nut advantage, which refers to the range that has more super strong hands (sets, two-pairs, overpairs, top pairs with the best kickers, etc.).

When one player has a notable range advantage, that player gets to be aggressive. This is a simplification, but a rather handy one. With that said, what if the flop isn’t all that favorable for us?

Today we will look into exactly that, using one of Fried ”mynameiskarl“ Meulders’ recent Play and Explain videos from the Upswing Lab training course.

A Hand Played By A Certain Mr. Meulders

The flop comes down T♥ 8♠ 6♦. Our opponent checks and Fried has a decision to make.

Poll: Would you bet or check in this spot?

Fried ultimately decided to check back.

On connected flops like T♥ 8♠ 6♦, things get a little bit tricky.

Sure, we still do have all the overpairs in our range, which our opponent mostly does not. But when it comes to the strongest hands this flop has to offer, we are trespassing on our opponent’s land.

While we might 3-bet TT at least some of the time from the button, the lower sets (88 – 66) are clear calls in this position. Our preflop range in this spot can be visualized here (this is from the Upswing Lab’s cash game chart viewer): On T♥ 8♠ 6♦, our opponent probably has all of the sets in his range once he calls our 3-bet. And if we are facing a particularly loose opponent, preflop calls with hands like T8s, 97s or 86s are not completely out of the question either.

As a result, we will have to proceed on this flop with caution, meaning we don’t get to c-bet this board as much as others. Fried concurs, saying that “he will start with a check here“ and take it from there.

However, he does follow this up by noting that “even though when in doubt, 33% pot c-bet [with your whole range] in a 3-bet pot is still a good strategy.“ You can take that as an illustration of how powerful of an overall advantage the preflop aggressor has by having those QQ+ hands in their range, especially when combined with being in position.

As a general rule, in heads up pots, it is really hard to do too much damage by continuing with your entire range utilizing a small size, unless the flop is truly hideous for you (such as 5♥ 6♥ 7♥ when you hold a black AK).

But what would the optimal flop strategy on this flop be? Fried uses Simple Postflop software to find out!

It turns out that Fried does have a slight edge in EV on this flop. But, as suspected, we are supposed to be checking a lot — about 40% of our range. The hands that are checked the most often are mainly naked A-highs and K-highs. This is primarily because they are lacking any draws, meaning they are very bad bluff candidates.

A hand like QJs, on the other hand, is almost never a check, and we get to bet other straight draws like A9s, A7s, Q9s and J9s a fairly decent amount of time as well.

Interestingly enough, if we add some pair plus gutshots into the mix (like 98s, 87s and 76s), Simple Postflop recommends betting them almost all of the time. This could be explained by the additional equity these hands have against Villain’s strongest part of the range.

As for our particular hand, it is pretty much an even mix of checks and bets and it all comes down to the suits. This is a rather slight difference, but A♦ K♠ does block our opponent’s backdoor flush draws, resulting in being a more profitable c-bet than A♣ K♣, for example, which lacks in this regard.

To protect our checking range from being too weak, it is necessary to check some strong made hands too. We prefer hands that either:

Notice that Simple Postflop prefers betting J-J and Q-Q over K-K and A-A. This is because the former are much more vulnerable to an overcard rolling off on the turn than the strongest overpairs are.

Checking back with a set just to be able to show up with the effective nuts on the river is also something that should be done occasionally.

After checking back his A♣ K♦ on the flop, the turn comes 3♦ and our opponent leads for about two thirds of the pot.

We established that Fried will have many made hands to call this turn bet with, starting from bottom pairs all the way up to the sets. But is that enough? And if it’s not, what other hands shall we defend with? Will A♣ K♦ make the cut?

Remember that in addition to our flop made hands, we did pick up a number of flush draws as well as paired a three with A3s. With all that, it seems like we are almost done in terms of looking for hands to defend the turn bet with: You can see that pretty much anything worse than A-K (that is not a draw) is a clear fold. Most notably A-J and A-Q flies into the muck 100% of the time. As for A-K itself, we are folding majority of it, calling only some of the time.

It once again comes down to the suits, but Fried points out that we are now talking about the closest of details.

It’s a thing that when a flush rolls off on the river, it is good to have a blocker to bluff with. But these things go really deep. Sometimes these subtle effects are not very clear and in one simulation the logic goes one away and in another sim the logic goes another way. I wouldn’t really lose too much sleep over it.

With that, Fried throws A♣ K♦ into the muck and moves on to the next hand.

The general rule is that the better the flop is for your range, the more frequently you can bet — and vice versa. When the board favors the caller, it is time to buckle up and work on your defense.

The most important thing to remember here is that since the pot will be often fought for over several streets, it is crucial to start building your turn (and river) defense range on the flop already.

Combining good hands you checked on the flop with draws and made hands you hit on the turn will make for a solid defense line against your opponent’s bets. In many cases, it will be the vast majority of what you will have to continue with and will stop your opponent from profiting easily.

Want to learn more about playing unpaired overcards on the flop? Read 3 Situations to Value Your Overcard Hands in Texas Hold’em. 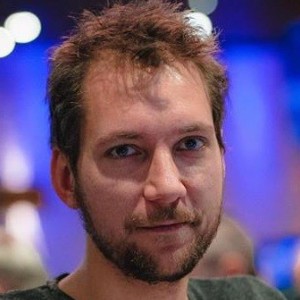 Successfully trying not to be all that terrible at poker since 2009.