How a Strategy Mastermind Adjusts in Smaller Games (3 Hands)

Adjusting your strategy to exploit weak players is one of the most valuable skills you can have as a poker player.

While analyzing each hand, we’ll focus on Fee’s read-based plays that aim to exploit the tendencies of the player pool (a.k.a., exploitative play).

How Fee Approaches These Games

Unsurprisingly, not many super strong players are grinding the 50NL Zone games on Bovada. Fee studied a similar player pool (the 50NL games on America’s Card Room) for an Upswing Lab module and came up with a few adjustments that win more money.

Fee notes that the most important adjustments to make in these games are to bluff less often than usual and value bet thinner than usual. Although he didn’t specifically say so, Fee’s play makes it pretty clear that these adjustments are for postflop play. In other words, you can still open and 3-bet light preflop, but you should play a more value-heavy strategy postflop.

Fee also notes that players don’t bluff enough in most situations, including preflop, and that they are in general more passive. This should make us a bit less inclined to call 3-bets/4-bets and postflop barrels.

Keep in mind that these reads aren’t just for the weaker players. 50NL Zone grinders seem to have these holes in their game too, though the tendencies may be more extreme in weaker players.

You’ll see the key adjustments he makes throughout the sample, which you can copy-paste into your own strategy.

Alright, now let’s start the analysis with a quick hand. You have a decent-but-not-very-strong hand and are getting a good price in position. This seems like a very standard call, right?

Indeed, Ryan’s standard play with QJo blind vs blind is probably to call. However, another option to consider, and the one Ryan goes for, is to raise:

Ryan probably isn’t 3-betting this hand against every opponent, but in this spot, he feels a 3-bet is the best way to exploit this opponent.

As he clicked the raise button, Fee had this to say:

A minimum raise blind versus blind I definitely do not think much about. We want to raise it up to put a lot of pressure on him.

In other words, Fee is reacting to the SB’s weak raise similar to how he would react to a limp. He’s attacking a weak, wide range with an aggressive raising strategy

Another reason is his read that the average 50NL Zone player is too passive. This is especially true in SB versus BB situations, where both players should have wide ranges. In my experience — and probably Fee’s experience, too — wide ranges exacerbate the mistakes passive players tend to make.

Pop quiz: Why is it better to 3-bet QJo, here, against a passive player than an aggressive player?

Additionally, his passive strategy will be easy to play against postflop when he does call. He’ll probably play pretty straightforward postflop -- rarely raising versus our bets -- which allows us to realize or over-realize our equity.

Additionally, Fee mentions the high rake at 50NL as a reason for 3-betting, since pots that end preflop are not raked. Calling any preflop raise is generally much worse in high raked environments like this. Ryan notes that going for a loose squeeze here pushes the SB out of the pot, and that it’s appropriate since most of his opponents are not 4-betting enough.

This is a tough board for Fee’s opponent, and a small bet size puts him in an awkward spot. Fee would likely bet this size with most, if not all, of his hands.

Now, one might argue that a tight fold is in order here since most of our opponents don’t bluff a lot. However, general reads such as ‘most players don’t bluff enough’ should not dictate our entire gameplay; rather, they should usually only be relied on when we have a close decision, and after we’ve considered all other important factors.

All that said, this hand is a very easy call — even against a player who we suspect is passive — especially getting such a good price against the small raise.

Note that raising as the in position player on this board isn’t a theoretically sound play, which means he’s likely a weak player that could show up with some random, silly hands. Our opponent could easily have some random bluff, like A♦ T♦, or he could have a draw, or he could have a worse value hand, like K♦ 8♦.

This is a pretty bad turn for our hand. The button could be have raised on the flop with 76s or A2s, and we’re now drawing dead against those hands. Plus, some of the button’s possible flush draws picked up more equity (e.g., 8♠ 7♠ or A♠ 6♠).

In theory and despite the bad turn, this should still be a fairly easy call for us. After all, we are going to get to this turn with a lot of different hands since we’d bet most of our range on the flop and defend many of them against a small raise.

Because of this, Fee says, seemingly unhappy:

Well lads, don’t think we can do anything but call here. Maybe hero-fold top pair in a 3-bet pot? Probably not — it is just too strong of a hand in this situation.

However, from an exploitative perspective, this certainly looks like a very close decision between calling and folding. The general reads that our opponents play too passively preflop — meaning the button may have just called with AK preflop — and that our opponents don’t bluff enough are reasons for folding. Plus, blocking possible flush draw-bluffs with the J♠ is not ideal.

These reasons are why I think we can consider making a very sad fold on the turn. But, again, it’s close. I would probably call with KQ, and maybe KJ with the jack of another suit.

Fee did end up calling and was shown some bad news (7♥ 6♥) by his opponent.

This third and final hand is a weird one, and you probably won’t encounter anything similar at any stakes. However, I think there are important things to learn from it. In particular, the adjustments Fee makes, especially on the turn, are very interesting, and they illustrate how to adjust on the fly.

Click play to watch the hand or scroll down for a readable version of the analysis.

This preflop play is certainly loose. But due to Fee’s massive skill advantage over the average 50NL player, he can make it work, even despite the rake. (Most less experienced players will be better off open-folding or folding to the squeeze.)

Facing this comically small bet, Fee is confused: “I have no idea what this is.”

Of course, for such a good price we have to at least call, having the draw to the nuts and some backdoors. Raising here as a bluff is also a reasonable play, but Fee elects to just call.

Fee’s decision to check here is interesting, and it brings us back to the topic of exploitative play.

When the action is on Fee again, he explains:

The problem is that we are now in a prime bluffing position and it might just not be a good spot to bluff. I think I am just going with a ‘let’s not bluff’ approach.

What he means by “prime bluffing position” is that, with a theory based approach, this is an easy bluff. This is the best draw in our range and it has no showdown value, making it the perfect bluffing hand. Consequently, if we do not bluff this hand  — the very best hand to bluff with — then we are never going to bluff in this spot.

Here is where exploitative reasoning comes in. For betting as a bluff to be better than checking, each of the 3 players would have to fold a lot of the time. And remember Fee’s general read on these games is that players call too much in many situations. Well, this is very possibly one of these situations!

This is especially troublesome since the SB and BB seem like weaker players and therefore probably fold less than average.

Pop quiz: What play(s) did the SB and BB make that could make them seem like weaker players?

SB’s 3-bet squeeze size indicates he might be a weaker player. It is too small and gives opponents a cheap price to see a flop.

BB’s cold call of the squeeze makes it likely he is a weaker player. This play in itself is not necessarily bad, but a good player would only do this very rarely, with specific and very strong hands. Weaker players, on the other hand, make this kind of call more often and with hands of varying strength.

However, the biggest clue that the BB is weak was his tiny flop bet. A good player would probably never bet so small in this spot.

Additionally, betting on the turn would allow SB and BB the opportunity to check-raise, which would force us to fold our equity.

Fee considers going all-in but then decides to bet 70% pot. Considering how few 8x hands are in our opponents’ range, the theoretically correct size would be a bit bigger, but 70% is a good exploitative size.

For my part, I think I would go all-in here. But Fee must think that a 70% pot bet will elicit many more curious hero-calls than an all-in bet.

It’s pretty surprising that none of the players decided to call for the chop, conflicting with our general read that the player pool doesn’t like folding. Reads have limitations, though, which is why it’s so valuable and important to play a theoretically sound strategy.

Any Questions or Comments?

Drop them in the comment box below the article.

That’s all for today! I hope you’ve enjoyed this supplement to Ryan’s Play and Explain series.

Good luck out there, grinders!

Want to be the best player at the table, no matter what style your opponents play?

Join us in The Upswing Lab, an extensive poker training course that will help you take your cash game & tournament skills to the next level. 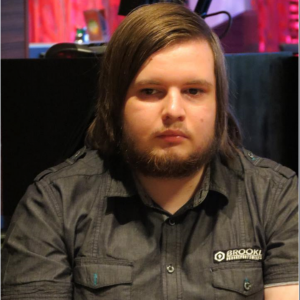