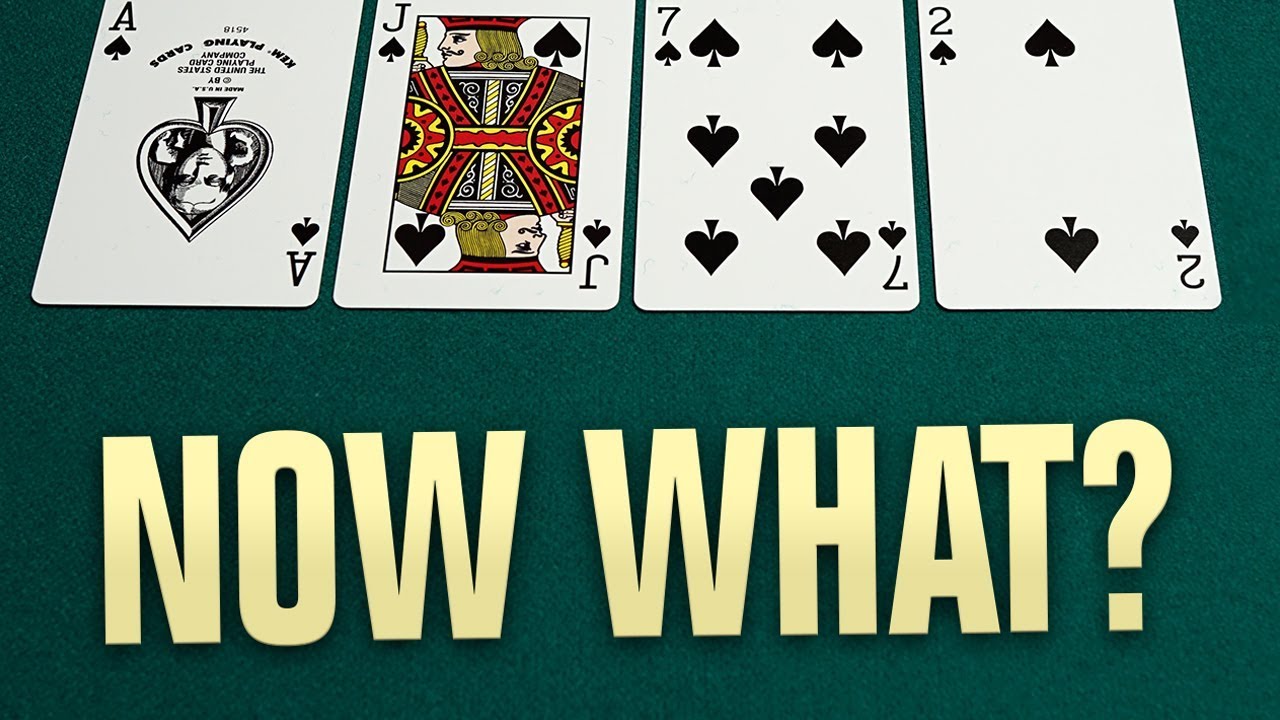 Boards with four cards of the same suit are a special combination of weird and rare...

...and many players misplay them as a result.

Some players tighten up big time on four flush boards, never committing a bet without the first or second highest flush.

Other players turn up the aggression on four flush boards, which is a strategy that will work well against some players while failing versus others.

The best approach is somewhere in between, and that’s the approach you’re going to learn about today. Here’s what we’ll cover:

This is part 3 of Alex "Kanu7" Millar's new strategy series! Alex is one of poker's biggest-ever cash game winners. He's joined the Upswing team to create content that will help you improve your cash game skills, including an advanced cash game course (coming in January 2020).

Want to go back? Check out part 1 here and part 2 here. Parts 4 and 5 will be published on this blog (and YouTube) on January 3rd and January 10th.

How a Four Flush Turn Should Impact Your Overall Strategy

If you read the last two articles, you’re going to be familiar with the types of strategic tweaks that are required on four flush turns. To sum up the findings from Alex’s private solver:

We can understand why we should make these adjustments by considering the incentives of individual hands in our range.

The Incentives of Individual Hands
...in case you skipped the last article or just want a refresher.

Of course, a given hand's equities against these two groups tend to move together. For example, if you have a hand that has very strong equity versus the fold range (making it less inclined to check-raise), the hand probably also has strong equity versus the continue range. The effect of the latter cancels out the effect of the former, which makes your hand more inclined to check-raise.

Let’s consider our incentives to bet if we held the 7♠️.

First, how do we do vs opponents folds? We have 100% equity because our opponent is unlikely to fold any better flushes, two pairs, or sets. In other words, versus just our opponent’s folding range, we have no incentive to bet with the 7♠️.

What about vs opponents calls? Our equity actually isn’t quite as high as our absolute hand strength might suggest. If we’re behind versus a higher flush, we have 0% equity. Even if we’re ahead of a hand like a set or two pair, there are at least a handful of rivers that make our hand second best.

We are incentivized to check with the 7♠️ on K♠️ J♠️ T♠️ 3♠️ versus both the continuing range and the folding range of our opponent.

Here’s the point: the 7♠️ is the fifth best possible flush and a pretty strong hand relative to our range, yet it is still not strong enough to bet with for value. Therefore, we should have a pretty narrow betting range.

Our primary bet size should be big, but not too big — betting pot is a fair option. If we bet too big (2x pot, for example), our opponent's decision is made too easy — they can simply fold almost everything but the nut flush, which they will have relatively often.

We’re gonna have more EV with our strongest hands [including the nut flush] by betting a bit smaller on both the turn and river...We’re just gonna get a ton of folds on the river when we try to go for such a big size.

So that’s why we’re not seeing huge sizes. We’re seeing something around about pot or maybe a bit bigger sometimes. In this [K♠️ J♠️ T♠️ 3♠️ board’s] case, it’s a bit less than pot.

Alex goes on to talk about a second bet size that’s used by his solver, particularly on our K-high example board: a small bet of around 32% of the pot.

The solver bets small (25-33% pot) primarily with hands like sets, two pairs, and straights at some frequency, as well as some ace-high flushes to protect the overall small betting range.

The non-flush made hands are incentivized to bet small versus our opponent’s folding range because any spade on the river would counterfeit our hand and result in a split pot.

However, there’s one key thing to understand before using this small bet size on four flush boards…

You should do it less often as your opponent’s range contains more flushes. This will typically happen on lower boards, like 7♠️ 6♠️ 3♠️ 2♠️, because then your opponent can have the higher flushes like K♠️ T♦️

The main things to understand here are the [concepts at play]. The fact that it’s plausible that we can have this small sizing and it’s also plausible that we won’t. And whether or not we do will depend on the flop sizing and exactly how many flushes both players have, and so on.

Want to learn how Alex recommends playing versus small bets on four flush turns? (You know, just in case one of your opponents reads this article.)

Watch the video and skip to 13:35 for Alex’s counter-strategy versus small bets on four flush turns.

Ready for part 4? Check it out here.

One of the biggest cash game winners of all time has been working on an extensive course that will help you dominate cash games!

The course will contain a whopping 36 hours of content, along with preflop ranges for every common spot at three different stack depths (50bb, 100bb, and 200bb).

Join within the first five days after launch and get a bonus course from Kanu7 for free. More details to come.