To mark the beginning of the 2021 World Series of Poker (which started yesterday), today’s article zooms in on a key hand from the 2017 WSOP.

Specifically, a hand from the $111,111 buy-in One Drop between Doug Polk and Main Event champion Martin Jacobson.

This battle took place with 9 players left at the final table — exactly the point of a tournament when ICM has its greatest impact on decisions. It also involves two players in the middle of the pack chip stack-wise, so that ICM impact is amplified.

Busting with four shorter stacks at the table is a tragedy of Shakespearean proportions, thus both players in this hand are incentivized to proceed with caution.

Such scenarios can also create a poker ‘game of chicken’ in which the first person to go all-in benefits by putting all the pressure on the other guy. Playing for the bracelet and a casual $3.7 million, that is exactly what happened.

Watch the video or read on for a written recap and analysis.

Editor’s Note: This article is by Irish tournament pro and Unibet Poker ambassador David Lappin who is a great follow on Twitter. Alongside Irish poker legend Dara O’Kearney, David produces and hosts the GPI global poker award winning podcast ‘The Chip Race” sponsored by Unibet Poker. All episodes are available on Apple Music, SoundCloud and Stitcher.

The first thing worth noting is the large ante. With more dead money, ranges can be widened a little. However, in a spot like this, the stack sizes and relative positions have the biggest impact to each player’s range. Dara makes the point that it’s also good to size up slightly.

Despite having players with larger stacks behind, K♠️ J♠️ is a fine bottom of the range open for Jacobson. Caution is required, however, because there is extreme ICM pressure. The average stack is 30bb. But it’s worth noting that if you take Grospellier out of that, then the average stack is just 22bb.

Doug’s defend with A♦️ T♦️ is mandatory. The solver treats it as a pure call, advocating for very few 3-bets overall (just QQ+, some AK and a few low wheel Ace-X hands).

In high ICM situations like this one, passivity is the order of the day. Jacobson in 4th position covers Doug who is in 5th. But Doug can severely wound Jacobson and put him into last position.

Therefore, both preflop and postflop, both are heavily incentivized to play judiciously.

A juicy flop! Jacobson has top pair and a backdoor flush draw while Doug has the nut flush draw.

Doug checks his entire range on this texture, and Jacobson has a clear bet. The solver likes Jacobson’s sizing (around 30% pot) with its entire range.

Doug has a few options facing this bet. Folding is out of the question, but the solver mixes calls (25%) and raises (75%). Doug’s decision to call is certainly fine.

The 3♠️ has had a significant effect on the range advantage. Doug can have 65-suited, 22, 33 and 44, plus some two pair combos, almost all of which Jacobson lacks. With the exception of A5-suited, which is in both players’ ranges, the best hands Jacobson can have are AA, KK and AK.

Interestingly, the solver likes a lead from Doug with 20% of his range. This includes his actual holding, which it pure leads.

As played, Jacobson should go for a bet the vast majority of the time. The solver mixes between three actions in this spot: betting Jacobson’s actual size (35% of the time), betting 6.7bb (60% of the time), and a sprinkling of checks (5% of the time).

Note: When interpreting output of this nature, it’s probably best to ignore the 5% frequency for the sake of simplifying your strategy.

As played, Doug is presented with a tremendous semi-bluff spot. And, perhaps most importantly, the opportunity to put Jacobson in ICM Hell.

When Doug made a video about this exact spot, he said that he would fold his non-nut draws versus Jacobson’s bet, and the solver agrees.

If he calls and wins, he’s up to 2nd place while eliminating one of the better players left. If he calls and loses, he’s in last position with just 6bb.

Let’s consider the bad and good case scenarios for Jacobson based on what Doug could have here.

If Doug has any of these hands, Jacobson is in very rough shape.

If Doug has a draw, Jacobson is in a good position to win a huge pot.

After much consideration, Jacobson decided to let it go. He explains his three reasons:

*In all likelihood, he may have picked up the fact that Doug had a clear decision with which he was happy.

These three factors tipped Jacobson towards a fold, which cost him around $123,000 (in pure equity terms).

Doug pulled in a pot worth over 33.3bb. This moved him up to 3rd place and he ultimately took down the event for $3.7 million, his career-best tournament result. Doug ultimately won the ICM game of chicken, managing to get his money in first and forcing all the pain and misery of a difficult decision onto his opponent.

Jacobson is still haunted by this hand as it was a tough spot that he got wrong from a game theory standpoint. Even in the ICM pressure cooker, the call shows a healthy profit.

That said, there was still one solid mitigating reason for Jacobson’s huge fold. Even if his belief that Doug would not find enough bluffs was wrong and even if his physical read that Doug was strong was wrong, it was certainly true that there was some value at the table (despite the fact that it was a $111,111 buy-in!)

What do you think of Jacobson’s fold? And would you have pulled the trigger on the semi-bluff in Doug’s spot?

Thanks for stopping by. 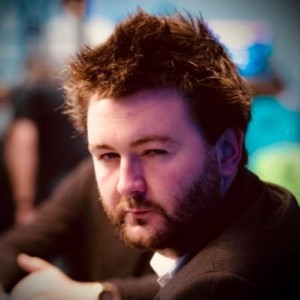