Success in Texas Hold’em starts with good preflop hand selection. If you’re playing a winning strategy, you’ll be folding preflop more than 70 percent of the time.

It’s critical to have a solid understanding of poker hand rankings, what hands are worth playing, and how those hands change based on your position at the table. Strong hands like A♥A♣ and K♠K♦ should always be played from any position, while hands like 8♥3♣ are very weak and should almost never proceed past the preflop betting round.

Factors like position, number of players in the hand, and playing style of your opponents should all be considered when deciding to put money in the pot preflop.

Preflop mistakes will sabotage your game, so let’s go through some of the essential elements of selecting your Texas Hold’em Starting Hands:

Many of the recommended staring hands from the Upswing Preflop charts include suited combinations of hands, but not their offsuit counterparts. JTs is a hand you’ll be playing most of the time, while JTo is played much less often.

The other important notation you’ll often see is “+”, which can mean different things depending on what hand it’s attached to.

The notation 22+ means you should be playing 22 and all other higher-ranking pocket pairs. 77+ means play all pocket pairs including 77 and better, so this range excludes the pocket pairs 22 through 66.

The “+” at the end of a hand like A7s+ means play all suited aces that are at least A7s or better. So, in this case that would mean A7s, A8s, A9s, ATs, AJs, AQs and AKs. The notation A7o+ means play all offsuit aces A7o or better.

Quite possibly the most important concept in poker, position refers to where you’re sitting in relation to other players, the dealer button and the blinds in a given hand.

All Texas Hold’em poker hands begin with two players posting the “small blind” and “big blind”, which are mandatory bets that rotate around the table after each hand. The “dealer button” is always immediately counterclockwise to the small blind.

These are the positions at a nine-handed table: 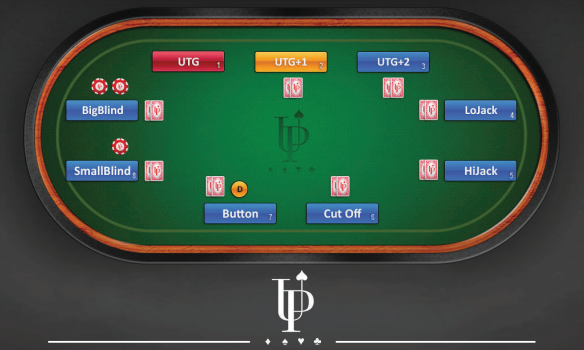 The player immediately clockwise of the big blind is always first to act in the preflop betting round, and this position is known as “Under the Gun”, or “UTG”.

The UTG, UTG+1 and UTG+2 positions are known collectively as “early position”, or “EP”. Because they are the first players to act preflop, their starting hand ranges need to be tighter, as there are several players left to act after them. The “LoJack” and “HiJack” are sometimes referred to as “middle position”, and the cutoff and button are known as “late position”.

Because the player on the button is last to act in all postflop betting rounds (the flop, turn and river), you’ll always employ a looser starting hand range when sitting on the button. This happens because you’ll have the most information among all players in the hand, as all other players have to act before you.

Which Starting Hands Should You Play?

Let’s start putting together the concepts of Texas Hold’em starting hands and position by taking a look at the Upswing Poker free preflop charts. These charts place all possible staring hands in a color-coded matrix that make it easy to visualize these concepts.

We’ll start with a look at the Under the Gun (UTG) starting hand ranges in a nine-handed game: The red squares represent the hands you should play from UTG.

This hand matrix represents all of the possible starting hands in Texas Hold’em. The pocket pairs (22 through AA) bisect the matrix diagonally, and all suited hands are to the right of this line, while their offsuit counterparts are to the left.

The hands in red represent the starting hand range you should play from UTG. This is the tightest of all of the starting ranges, and using our notations from above, this range can be represented as 77+, T9s+, QTs+, KTs+, AQo+, and ATs+.

When playing from UTG, you’ll often get callers and face 3-bets (raises), so this hand range needs to only include the strongest starting hands, as these hands play well postflop. 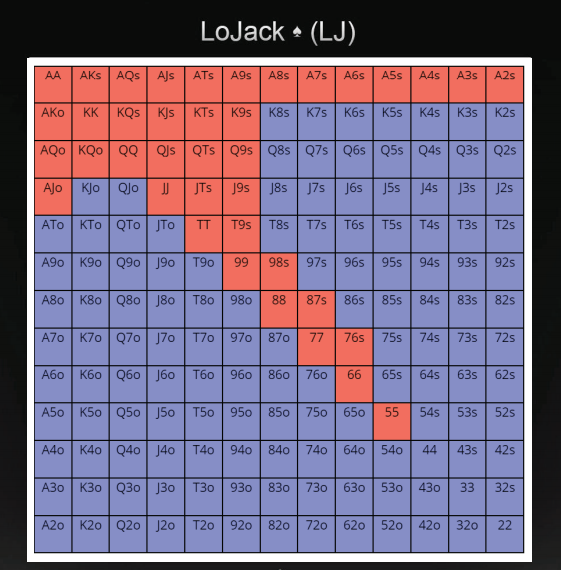 We’ve also added another suited three-gapper with K9s, as well as another offsuit “broadway” hand with AJo (“broadway” hands are any hands where both cards are an ace, king, queen, jack, or ten). With fewer players left to act after us, we can start to include more hands to our starting range.

Finally, let’s take a look at our range when playing from the button: This is a much wider range than the LoJack and UTG ranges, which now includes most suited kings (K4s+), many offsuit aces (A4o+), almost all of the suited connectors (43s+) and one-gappers (53s+), and all pocket pairs (22+).

We raise first in with so many more hands from the button, as we’re now only playing against the blinds. There’s a great chance that both blinds fold and we win the pot without even having to see the flop, and this is what makes even the weakest hands in this range profitable when playing from the button.

Get free charts like these for every position now!

Premium Pocket Pairs – Hands like TT+ are premium preflop holdings and should be raised first in from any position. These are hands that are profitable over the long run, and can withstand aggression from 3-bets, as well as callers.

Middle Pocket Pairs – The pocket pairs from 55 through 99 are good preflop holdings but shouldn’t be played as aggressively as the premium pairs. The weakest hands in this range (55 and 66) should be folded from early position in a full ring game.

Low Pocket Pairs – 22 through 44 are hands that should not be played as a raise first in from the early positions, but become profitable when played from the later positions. You’ll often be looking to hit a set (three-of-a-kind) on the flop with the low pocket pairs.

Premium – Hands like AKo and AQo are premium offsuit hands and should be played as a raise first in from all positions, even in a full ring game. In a 6-max or shorthanded game, you can add hands like KQs and maybe AJs to the premium list and open with such hands in any position.

Sometimes Playable –  AJo and KQo are borderline premium hands that should actually be folded from the earliest positions in a full ring game. Other offsuit hands that are sometimes playable include JTo+, A4o through ATo, QTo+, and KTo+. Hands like A2o and A3o are at the very bottom of this range and should only sometimes be played from late position.

Trashy – Hands like Q5o, J6o, 52o and 84o are among the weakest starting hands in Texas Hold’em and should never be played as a raise first in. The majority of Texas Hold’em starting hands are in this category, so it’s important to get into the habit of only selecting appropriate hands to play from each position. Sometimes you’ll go through long stretches of unplayable hands; don’t get bored and start opening with trashy hands!

Connectors – These hands include any two cards that are connected and of the same suit. The best of this category are hands like AKs, KQs, QJs, JTs and T9s. AKs is a premium hand and should always be played from any position. KQs is also a very good hand, while QJs, JTs and T9s are hands that play very well from most positions and have the potential to draw to flushes and straights and win big pots.

The lower suited connectors, like 76s and 54s, are playable as a raise first in from the late positions, but should be folded from early position.

Gappers – Suited one-gappers are hands like KJs, T8s, 75s, etc. These hands can connect with the board and win big pots, but they’re not as profitable as connectors.

The bigger the gap, the more selective you should be with these hands. Two-gappers include hands like KTs, J8s and 74s, three-gappers are hands like K9s, J7s, 73s, etc. The top gapper hands (like KJs) play well as raises from the middle to late positions. The lower two and three gappers (like T7s, 85s, 42s) might be playable from late position, but should never be played from any other position.