If you had to choose one, would you use a game theory or exploit based strategy at the table?

This has been one of the hottest topics in poker for years.

Almost all modern high stake crushers have spent extensive time working with solvers to develop a strategy that is close to our current understanding of game theory optimal (GTO) play.

Proponents of exploit-heavy strategies argue that using a GTO-based strategy means you don’t get to take advantage of your opponents mistakes, and you miss out on loads of value as a result.

You’re about to learn:

So let’s get started!

The term “GTO” is thrown around a lot these days, often incorrectly, so we should review exactly what it is. If you have a solid grasp of GTO, this will be review for you — you can skip to the next section.

A game theory optimal strategy is a strategy that can not be exploited by your opponents. In other words, if you play a true GTO strategy there’s no possible way for your opponents to get an edge on you. (Or in the case of casino games like blackjack where the edge is built in, GTO minimizes the edge).

The easiest way to illustrate this is applying it to rock-paper-scissors (or roshambo).

While the GTO strategy for rock-paper-scissors is simple to understand, in poker it’s much more complicated. The GTO No Limit Hold’em strategy exists, but it is not yet known. The game is simply too complex to be solved with today’s technology.

However, we do already understand some GTO concepts, such as minimum defense frequency, bluff-to-value ratios, and mixed frequency plays, which advanced players use to form their strategy.

What is an Exploitative Strategy?

An exploitative strategy is a strategy that aims to take advantage of the mistakes and tendencies of opposing players.

Suppose you know that your opponent uses a rock-heavy strategy, playing rock 40% of the time and paper and scissors 30% of the time each. You could exploit this opponent by always playing paper. Now you would win 40% of the time while tying 30% and losing 30%.

However it probably wouldn’t take long for your opponent to realize what you are doing and change their strategy. In fact, they could simply always play scissors and beat you every time — until you changed your strategy.

Poker is a much more complex game than rock-paper-scissors, but the same concepts apply. If you always fold to a certain opponents river bet because he ‘never bluffs’, for example, they can conceivably catch on and start bluffing you.

GTO vs Exploitative Play Explained in Less Than 2 Minutes

I wanted to include game theory expert Matt Janda’s 1.5 minute explanation of GTO vs exploitative play from the Upswing Lab training course. I do not recommend scrolling past this video — it’s pure gold:

An important concept here is that while a GTO strategy will always win money, it won’t win the most money.

If you know a player significantly overfolds to flop c-bets, for example, betting is going to be much better than checking even if a GTO solution would take both actions half of the time.

So the question becomes, why even learn GTO if an exploitative approach can win more money?

You Don’t Have to Choose!

The good news is you don’t have to restrict yourself to playing one strategy or the other.

You should play a solid, theoretically sound strategy by default, making exploitative adjustments as you identify profitable opportunities to do so.

The caveat here, though, is that you need good, reliable information to make accurate exploitative adjustments. When you don’t have reliable info to base your exploitative strategy on, you should lean towards a sound theoretical approach.

Where people differ is how quickly and how massively you should change your strategy. Some people see one hand and make giant, sweeping adjustments to their entire strategy based solely on that hand.

An oversimplified example of one spot players get in trouble follows.

Example of How Exploitative Strategies are Misused

Mark is playing live poker and sees someone 3-bet with K7o from early position, so Mark labels him as a “maniac.”

A few orbits later, Mark calls down versus the same player’s triple barrel with a middling hand he would normally have folded, only to be shown the nuts.

Mark’s mistake was assuming that his opponent’s loose preflop play indicated that he will play loosely postflop as well. Just because someone has a loose preflop strategy, that does not necessarily mean they go crazy postflop.

In fact, some players will strategically show down a crazy hand to craft an image that gets them paid off later. See: When Mark saw that his opponent 3-bet K7o, he shouldn’t have made a sweeping adjustment to his entire strategy. Instead, he should have made small adjustments to his preflop strategy versus that player, such as:

In live poker you almost never get a significant sample size, so you have to be extremely careful with the adjustments you make. You’ll have to make inferences based on showdowns and player pool tendencies, and you need to be ready to adjust back to your default strategy if your inferences start to seem wrong.

Online poker is different when using database software and HUDs. If you are a regular at a certain stake, you can have thousands of hands on some opponents and have fairly accurate statistics of the way they play. In that case you definitely want to use your data to make adjustments (when the sample is reliable).

Some people think that a GTO strategy is only fit for the higher stakes. They think that betting with a balanced range of bluffs and value bets at micro stakes is useless because players there are all calling stations that never fold.

This is not true. Here’s a graph posted recently in the Upswing Lab members-only group on Facebook: As you can see, his red line (money won without showdown) is very positive over quite a large sample. This Lab member didn’t just triple-barrel with air every hand, he simply tried to think of the number of value hands he had in any given spot and use an appropriate number of bluffs to be balanced.

This goes to show even at the lowest stakes, a sound theoretical approach is an effective way to win money.

If you want to thrive in today’s poker climate, you must understand what a theoretically sound strategy looks like. There are certainly times to adjust, but you can’t know when or how to make those adjustments without solid fundamentals.

This article covered why you should develop a theoretically sound strategy, but didn’t actually dive into how to play such a strategy.

For further reading, check out “4 GTO Myths That Way Too Many Poker Players Believe“.

If you want to learn a theoretically sound strategy that is easy to implement, join the Upswing Lab today. You get access to 65 lessons, 259 preflop charts, and our members-only community. Learn more now! 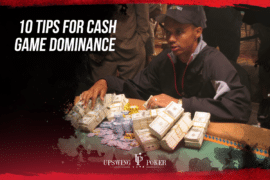 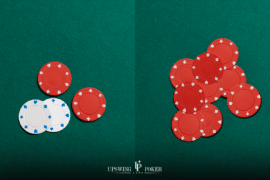 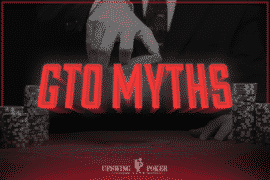 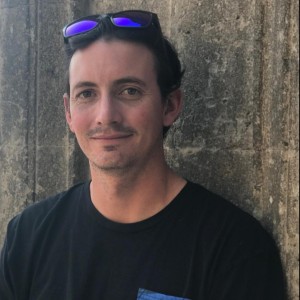