Sit in a poker game for any significant length of time, and you’ll hear some of the game’s most recognizable hands referred to by poker hand nicknames.

“Pocket Rockets”, “Big Slick”, “Snowmen”, “Ducks”, and even “Doyle Brunson” are all common colloquialisms used as poker hand names. The following list outlines 50 of the most commonly-used poker hand nicknames you’ll hear at the poker table.

Most of the nicknames on this list refer to starting hands/hole cards from Texas Hold’em, but a few others represent nicknames for made five-card hands. Some others, like “Barry Greenstein”, refer to one specific card hitting the table in a specific situation.

Let’s take a look at 50 poker hand nicknames used around the world: 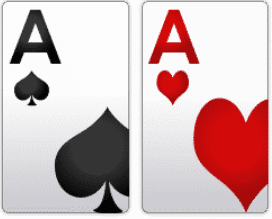 Pocket Rockets – One of several common nicknames for a pair of aces (or pocket aces), Pocket Rockets derives from the resemblance of the “A” to a rocket. This hand also lifts your spirits into the stratosphere when it comes your way.

Bullets – When turned on its side, the “A” somewhat looks like a bullet, with the top of the letter appearing as the tip. “Bullets” comes up at the table roughly as often as “Pocket Rockets”.

American Airlines – “AA” reminds some of the initials used by one of the most “popular” airlines in the US. Pocket aces is a top-flight hand, and the sky’s the limit when you find “American Airlines” as your hole cards. Cowboys – A pair of kings is sometimes referred to as “Cowboys”, perhaps because “kings” and “cowboys” start with the same sound. Even in an unlucky session, you’re back in the saddle when you pick up this hand.

Ace Magnets – The “Ace Magnets” nickname for pocket kings refers to this hand’s ability to cause an Ace to appear on the flop in Texas Hold’em. When that happens,  it’s often time to check the flop in disgust. Ladies – The female counterpart to pocket kings, queens are sometimes referred to as “Ladies”. Pocket queens are one of the top starting hands in Texas Hold’em, and lady luck has found you when this hand is dealt. 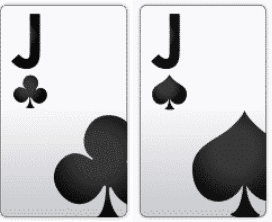 Hooks – This nickname comes from the resemblance of the “J” to a fish hook. Pocket jacks will certainly hook you into thinking you have a great hand, only to feed you to sharks later. 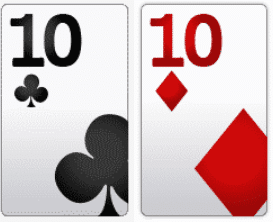 Dimes – The counterpart to the “nickels” nickname for pocket fives. Pocket tens can earn you a few dimes at the poker table if you play the hand correctly. Wayne Gretzky – Named after the uniform number (No. 99) of Wayne Gretzky, considered to be the greatest of all-time in the NHL. Pocket nines are ok, but not G.O.A.T. status like Gretzky.

Phil Hellmuth – The legendary Phil Hellmuth clinched the 1989 WSOP Main Event championship with pocket nines. You’ll never be able to play this hand as well as Hellmuth, but playing it reasonably well will pay off. Snowmen – The shape of the “8” resembles a snowman, but pocket eights are more of a lukewarm hand unless it improves postflop.

Dale Jr. – Named after the No. 88 car of NASCAR legend Dale Earnhart Jr. Dale. Jr. is a slight favorite in a race against hands like ace-king. Hockey Sticks – The “7” kind of looks like a hockey stick, the kind Wayne Gretzky would use.

Candy Canes – Another reference to the shape of the “7”, candy canes can be pretty sweet but they’re not that great.

Route 66 – Named after one of the most famous highways in the US, Route 66 also gives us the origin of our next poker hand nickname.

Kicks – “Get you kicks on Route 66″, the title of what’s probably the most famous song about Route 66. Presto – The origins of the “Presto” nickname go back to the pre-poker boom days of the 1990s. According to the PocketFives poker news outlet, the fascination with its namesake hand started on gambling forums in the 1990s. 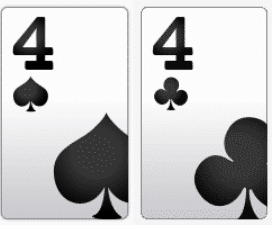 Darth Vader – Two black fours are sometimes referenced as “The Dark Side of the Fours”, aka “Darth Vader”.

Luke Skywalker – “May the fours be with you”, aka Luke Skywalker, for another Star Wars reference to pocket fours.

Sailboats – The “4” certainly does resemble a sailboat, but it’s generally less than smooth sailing when you’re trying to win a showdown with a pair of fours. Treys – A widely-used substitute for “three” in any sport or game, “trey” derives from the French word for three. 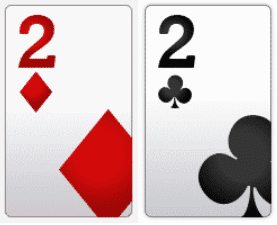 Deuces –  Like its “trey” counterpart, “deuce” is a common term for “two” in any card game. Deuce gets its name from “Deux”, the French word for “two”.

Ducks – The “2” kind of looks like a duck, and “duck” also kind of looks and sounds like “Deux”. Pocket ducks are the lowest pocket pair in Texas Hold’em, but performs surprisingly well against “Big Slick” and other non-pair hands. Big Slick – The “Big Slick” nickname for ace-king refers to picking up this hand combo as your hole cards in Texas Hold’em. Ace-King is a premium starting hand in hold’em, but can lead to some slippery situations when it doesn’t improve.

Walking Back to Houston – Perhaps the best of all poker hand nicknames, the “Walking Back to Houston” moniker for ace-king stems from the Texas poker games from decades ago. Barry Greenstein credits poker legend T.J. Cloutier for coming up with the term, with Cloutier referring to Houston players losing all their money with ace-king, and having to walk back home from Dallas.

Space Cowboy – A combination of “Ace from Space” and “Cowboy”, “Space Cowboy” brings together two great poker nicknames for another way to describe ace-king. Rocket Queen – A “rocket” and a “queen” together as one. “Rocket Queen” also references a song by Guns N’ Roses.

Anthony and Cleopatra – Named after a Shakespearean tragedy, ace-queen can turn into its own tragic tale if it runs into ace-king. Rounders – Named for Mike McDermott’s hand in the scene from Rounders, in which Teddy KGB takes all of Mike McD’s money. This hand sets the scene for an incredible up and down journey for Mike in the most iconic poker movie of all time. 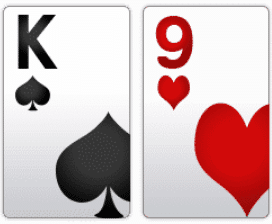 Canine – One of the more straightforward poker hand names, the “canine” hand refers to the “K” and the “nine” coming together for a tribute to man’s best friend. Q-Tip – Another fairly straightforward poker hand name for queen-ten. Like “cutie”, the QT initials for this hand inspire the “Q-Tip” nickname.

Quentin Tarantino – Yet another “QT” inspired nickname. Use these three poker hand nicknames interchangeably to keep your opponents guessing. T.J. Cloutier – We go from “JT” to “T.J.” with our nickname for jack-nine. T.J. Cloutier, as legend has it, flopped three straight flushes in a single year with this hand. This hand, along with “Walking Back to Houston” (for ace-king), is the second hand named after Cloutier on our list of poker hand names. Jackson Five – The jack-five easily lends itself to the “Jackson Five” nickname. While the Jackson Five was a big-money act, this hand probably results in negative cash flow if you play it too often.

Mowtown – The record label that brought us the Jackson Five, “Motown” is another poker hand nickname for the jack-five. Dolly Parton – The famous country singer’s most famous song, “9 to 5”, gives us the inspiration for the nickname for nine-five in poker. The song was written in honor of the 1980 comedy film, also titled “9 to 5”. 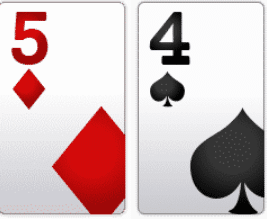 Chris Moneymaker – The poker hand nickname for five-four stems from Chris Moneymaker winning the 2003 World Series of poker with the 5♦4♠ combo as his final hand. The suited version of five-four can certainly make some money, but the offsuit edition should generally be folded preflop. 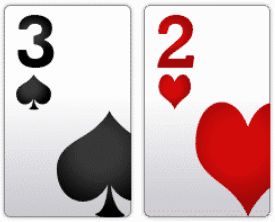 The Nut Low – The “nut low” represents the lowest possible hand you can have in a poker game. If you’re talking about preflop in a Texas Hold’em game, three-two offsuit is the absolute nut low.

Dead Man’s Hand – According to legend, Wild Bill Hickock held two pair, aces and eights, when he was shot and killed in a five-card stud game in Deadwood, South Dakota.

Broadway – “Broadway”, or a “Broadway Straight”, refers to the ace-king-queen-jack-ten version of a five-card straight. The cards that make up this straight are sometimes referred to as “Broadway” cards themselves.

The Wheel – The Ace-to-five straight is often referred to as the “wheel”. The wheel is the best possible low hand in games like Ace-to-Five lowball.

Ace on the River

Barry Greenstein – The famous poker book by all-time legend of the game Barry Greenstein, “Ace on the River” gives us the nickname for an ace hitting on fifth street. This can apply in Texas Hold’em, Pot-Limit Omaha, or any flop game.

Ace From Space – Another name used for when a timely ace appears on the river. Especially refers to hands in which said ace saves a player from impending doom.

Four Horsemen – Named after the biblical Four Horseman of the Apocalypse, four-of-a-kind kings can certainly spell the beginning of the end for your opponent.

Golf Bag – An all-club flush is sometimes called a “Golf Bag”, which is generally also full of clubs. 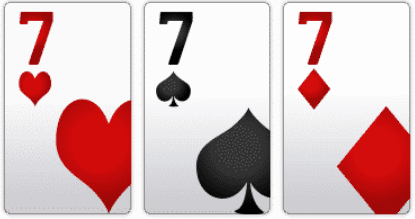 Jackpot – This nickname refers to the “jackpot” you’ve often hit when you see three sevens lined up in some other Las Vegas-style casino games.