Should You Ever Play Offsuit Connectors in Cash Games?

Most of the time, low and medium offsuit connectors are pretty worthless and should be folded.

However, there are some instances, mostly from the Big Blind, in which they are worthy of being played.

For that reason, I am going to cover:

Note: While higher hands like QJo and KQo are technically offsuit connectors, they are playable much more often and will fall outside of the scope of this article.

Let’s take a look at how to play these hands preflop.

Offsuit connectors aren’t the strongest hands out there, but what they do have going for them is some extra playability due to being able to flop straights and straight draws. They rank somewhere around the top 50% of hands. For this reason, you should not be open-raising with them very often.

You should never raise preflop with 87 offsuit or below from any position. These hands are simply too weak.

The other two, T9 offsuit and 98 offsuit, are strong enough to raise from the Button and the Small Blind when the action folds to you.

These two are strong enough to raise from the Button given that you will be in position if you face a call and there are only 2 players left to act, so it’s not super likely you’ll face a 3-bet and be forced to fold. From the Small Blind, there is only one player left which is a solid enough reason to compensate for being out of position for the rest of the hand.

Playing against raises is the most complicated aspect of preflop strategy with these hands. This first part is easy to remember, though.

When you’re in any position besides the Big Blind, you should always fold these hands versus a raise.

The hard part is when to defend with these hands when you are in the Big Blind. This will heavily depend on 2 factors:

The first rule here is that the closer the raiser is to the Button, the more hands you want to defend with (because you will be up against a wider range).

The second rule is that the smaller their raise size is, the more hands you can call (because of the better pot odds).

Let’s go through the positions one by one. Keep in mind that the “correct” strategy I am describing is meant for games with a high rake (like low stakes online or any live game with a drop).

Big Blind vs Under-The-Gun (6-max): Fold every offsuit connector versus any raise (even a min-raise).

Big Blind vs Middle Position (6-max): Fold every offsuit connector except against a min-raise. Against a min-raise, you can call with 54o through 98o at least some of the time (T9o every time).

Big Blind vs Cutoff: Fold every one of them against a 2.5bb raise or bigger. You can start calling the 76o+ sometimes against a 2.25bb raise, and around half the time against a min-raise.

Big Blind vs Small Blind: Assuming a standard 3bb raise size, you should always call with T9-offsuit. You can mix between calling and folding with 98-offsuit through 65-offsuit, while always folding the lowest offsuit connectors.

You should snap fold offsuit connectors every time versus a 3-bet. These hands are barely strong enough to open-raise, and their blockers are bad for 4-bet bluffing.

Note: Want to know exactly how to play every hand in every common preflop situation? Get instant access to extensive preflop charts and lessons (for cash games, heads-up, and tournaments) when you join the Upswing Lab training course. Lock your seat now!

Tip #1 – With an open-ended straight draw, don’t always call versus a bet (make sure you raise sometimes)

There are some spots in poker in which you can’t simply always make the same decision with the same hand.

Tip #2 – With a gutshot straight draw, you should mostly call (but still raise occasionally)

Similar to the open-enders, the gutshot straight draw should also be in both the raising range and the calling range.

Tip #3 – When the board is low, paired, and you have 2 overcards with some backdoors, you should raise some of the time

On low paired boards, it’s tough to bluff often enough because paired boards are so disconnected. For this reason, raising with some hands like 2 overcards with some backdoor draws works very well as a semi-bluff. This balances the times in which you actually have trips and raise for value.

*When out of position, I would raise around 25% of the time and check-fold 75% of the time. I would just call (aka float) if I was in position.

Bonus Tip: How to Play When You Flop a Pair

In general, it will be safer to play a more passive line when you flop any pair since you will have a medium-low kicker. Thus, you shouldn’t try to increase the size of the pot right away.

It’s usually best to play these hands as a bluff-catchers on the following street(s).

There you have it, a synopsis of how to play these weakish (but full of potential) hands in the most common scenarios. These hands won’t win you a lot of money, but hey, a dollar won, is a dollar won.

That’s all for this article. I hope you enjoyed it and that you learned something new. I am looking forward to reading your feedback and replying to any questions you might have! 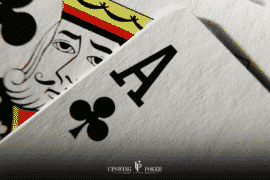