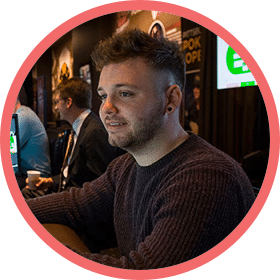 The final remaining players in the tournament agreed to a deal when the tournament went three-handed, ensuring at least a $105,000 prize for all three. They then played on for the remaining $10,000 in the prize pool, with McAulay coming away with the win. McAulay’s win came in the midst of the WPT World Online Championships, currently running on partypoker. The two-month series plays as one of the biggest events on the online tournament calendar, with more than $100 million total on the line across the series.

The Upswing Poker coach took his share of that prize money with the 8-Max Mini Championship win. The victory marks the second time McAulay has turned a relatively small buy-in into a massive payday.

That triumph came in a tournament with just a $22 buy-in. McAulay realized the mind-boggling accomplishment of topping a field of 59,779 players, earning $100,060 for the win.

New Upswing Lab content from McAulay on the way

The upcoming Play & Explain features McAulay reviewing his run through the $22 tournament, including detailed explanations of the key hands, thought processes, and strategies that led to the win.

McAulay poker resume includes significant success in heads-up cash games and multi-table tournaments, and he brings that experience to the Upswing Poker Lab. His first lesson in the Lab went up last month. It’s called Heads-Up 101, and it includes preflop ranges and strategies that will help you smash heads-up games.