Nick Schulman is a velvet-voiced poker player and commentator.

Let’s take a look at his biggest wins, memorable hands, and how he got into poker. 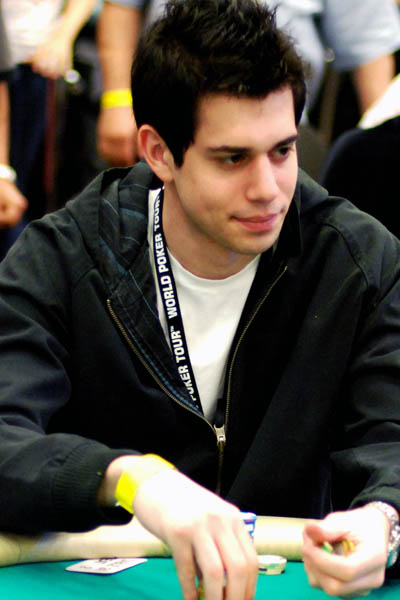 The Manhattan, New York native became the youngest winner ever of a WPT event when he won the 2005 WPT finals in Mashantucket (a record that has since been broken by an 18-year old Swede). For his efforts, Schulman pocketed a hefty $2,167,500 — the single-season record for a regular WPT event.

Schulman took down the HK$ 100,000 Short Deck Ante-Only event at the 2018 Triton Poker Super High Roller Series Jeju, later telling PokerNews that he had no idea what he was doing in the short-deck tournament. Schulman certainly knew enough about short-deck poker to win the tournament, collecting a $271,974 pay day in the process.

In the final hand of the tournament, Schulman finished the deal against Kenneth Kee. Schulman started the hand with Q♥Q♠, against Kee’s Q♣T♣. Kee limped for 160,000, Schulman raised to 650,000, and Kee made the call.

The flop came a disastrous Q♦T♦7♦ for Kee, making Schulman a 99.8 percent favorite to win the hand. All of the remaining chips went in from both players on that flop, and Schulman’s victory was clinched after the 9♠ and A♦ hit the board.

The final hand saw Schulman, with A♠K♥, and Matt Hyman, with A♦8♦, get all of the chips in preflop, with Hyman’s tournament life at risk. The Q♠7♦5♦5♠A♣ runout clinched the win, and the nearly million-dollar payday, for Schulman. Check out the PokerNews recap of the hand here.

Bryce Yockey was on the wrong end of an unfathomable beat against Josh Arieh in a 2-7 Triple Draw hand for the ages:

Since the age of 13, Schulman has been a world-class pool player, having been taught and mentored by many of New York City’s finest at Amsterdam Billiards. He is also a self-proclaimed boxing fanatic and—like many poker players—a chess enthusiast. Additionally, like many of this generations players Schulman began his poker journey online.

With age, experience, and maturity, Schulman has continued his rise into poker immortality. He has also embraced his new career as an exceptional poker color commentator where his intelligence, charisma, and knowledge truly shine.

Nick Schulman On the felt

Then, in April, 2006, he emerged victorious in the WPT Battle of Champions IV after eliminating Freddy Deeb.

Two years later, Schulman won his first highly coveted WSOP bracelet in the $10,000 World Championship NL 2-7 Draw Lowball event. He beat such renowned players as David Benyamine, Michael Binger, and John Juanda en route to pocketing a hefty $279,751. Then, in 2012, Schulman snagged his second WSOP bracelet in the same event and took home nearly $300,000. Schulman did well in subsequent years as well, placing 4th in 2013, 2nd in 2015, and 3rd in 2017.

To date, the 33-year-old Nick Schulman has amassed nearly $10.4 million in total live tournament winnings from his five titles and 69 career cashes. He currently ranks 38th on the U.S. All Time Money List.

Away from the table…well kind of

In September, 2010, Schulman appeared on Andrew Jenks’ MTV documentary style show World of Jenks where he detailed his early poker success, financial difficulties, and ongoing struggle with depression and anxiety. Even more recently, Schulman picked up a microphone and now provides highly lauded commentary on the game at which he excels. His first major gig was alongside veteran commentator Ali Nejad as the color man for the 2016 $300K buy-in Super High Roller Bowl for CBS Sports. Schulman received praise from peers and fans alike for his tremendous insight and pleasant personality.

Watch him explain his entrance into the wonderful world of broadcasting. Schulman’s enthusiasm is obvious and infectious.

Not only has handling the mic made Schulman a very capable commentator, but the experience has also improved his own play. How could it not? Such a newfound perspective is healthy in all aspects of one’s life, and Schulman’s has served him splendidly.

Recently, Schulman was a guest on Joe Ingram’s Poker Life podcast where he discussed his success with high-stakes poker and his new broadcasting career.

You can also take a look at Nejad and Schulman call the final table of the 2017 Super High Roller Bowl here.

To stay abreast of Schulman’s impressive poker career, his broadcasting gigs, adorable dog, and other happenings, check out his relatively new Twitter feed. Additionally, if you are a PokerGo subscriber, take a look at Nick Schulman’s appearance on Ali Nejad’s Super High Roller Club where the two men hit a different type of felt at New York’s Society Billiards and discussed the similarities between pool and poker. You can also catch Pokerography: The Story of Nick Schulman on PokerGo as well.