That Hourly Though – Bankroll Challenge Day 18

The Bankroll Challenge saw it’s long awaited return on day 17. Doug Polk and the Twitch chat took a moment to catch up as he loaded up $1 SNG after $1 SNG.

It was a profitable day despite a few misclicks and technical difficulties involving the webcam. The technical issues eventually caused Doug to end the stream earlier than expected. We entered day 18 with the bankroll now at $149.

From the Poker Life Podcast to the Bankroll Challenge

Right before the stream, Doug was a guest on Joey Ingram’s Poker Life Podcast. They discussed his recent WCOOP accomplishments and the return of the Bankroll Challenge.

Doug welcomed us to a brand new episode of the Bankroll challenge with a “new” webcam (it was actually his older one.)

Doug started the day by registering a $100 freeroll which starts everyday at 6:40 on WSOP.com. As Doug commented on Joey’s podcast, the Bankroll challenge is scheduled around this freeroll, as he can’t afford to miss on it’s value.

Doug mistakenly thought it started at 6:00 PM though, so he killed time playing $1 SnGs while he waited.

Doug was asked about his friendship with Chicago Joey. He explained they go all the way back to the small stakes Full Ring forum in 2+2.

Today, Chicago Joey is regarded as an ambassador for the game of Pot Limit Omaha. His podcasts have convinced many to try the 4 card game, and they are happier for it.

Later during the stream, Doug talked about his new YouTube channel, separate from his regular poker content. It’s designed to cultivate an audience outside of Poker.

Later in the stream, he elaborated further: ”I just want somewhere I can go and post about random stuff… let’s see if I can make it in YouTube in the non poker genre and try to make poker bigger by exposing it to a totally new audience. That’s not a bad strat. Worst case scenario I make a few videos and only I find them funny and it fails. Not the end of the world.”

He promised elaborate videos and not Vlogs, as that would be too boring for him.

45 minutes into the stream, Doug touched on the inescapable subject of the election. Doug, himself a socially liberal, fiscally conservative moderate, is just tired of the polarizing and negative affair.

Both candidates attack each other and that has trickled down to their supporters. Doug would much prefer a more respectful election, and I think we can all agree with that.

A well timed Polker Hands joke was enough for the mood to lighten as the SnG grind continued with pocket Kings.

The pocket Kings turned into a full house and Doug went all-in, winning the pot. 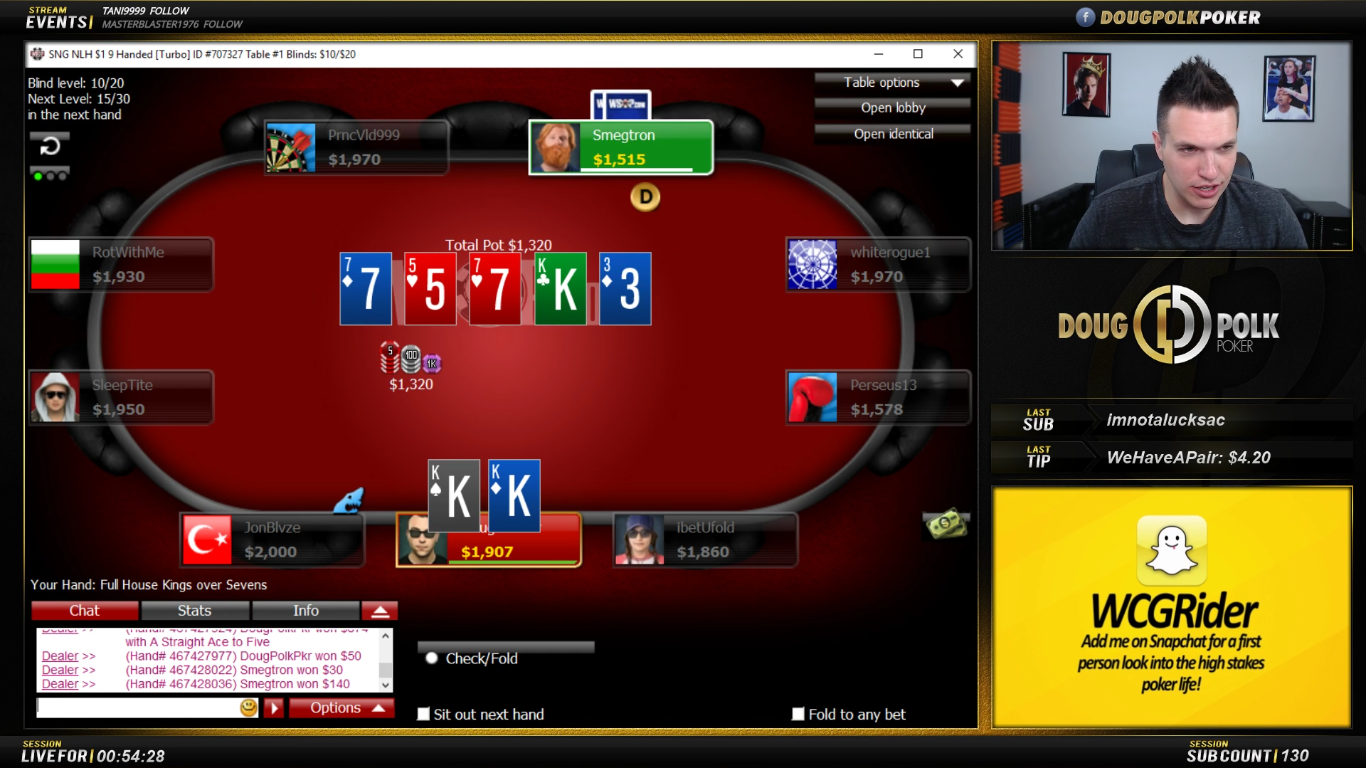 Afterwards, Doug joked with the chat about running for President. President WCGRider for 2020?

Chasing Glory in a $100 Freeroll

An hour and a half into the stream, Doug moved off of politics as he focused on the games. He fell just short in a $1 SnG, losing heads up against the well known stream reg JonBlvze.

The second place finish didn’t deter Doug, and after another solid run of SnGs the Bankroll was now at $154.

Doug’s SnG Bankroll strategy was proving fruitful. Not only was the bankroll up but the cards were good to him.

The much awaited freeroll started an hour and forty minutes into the Twitch stream. Sadly, Doug was out of the tournament after a few hands. 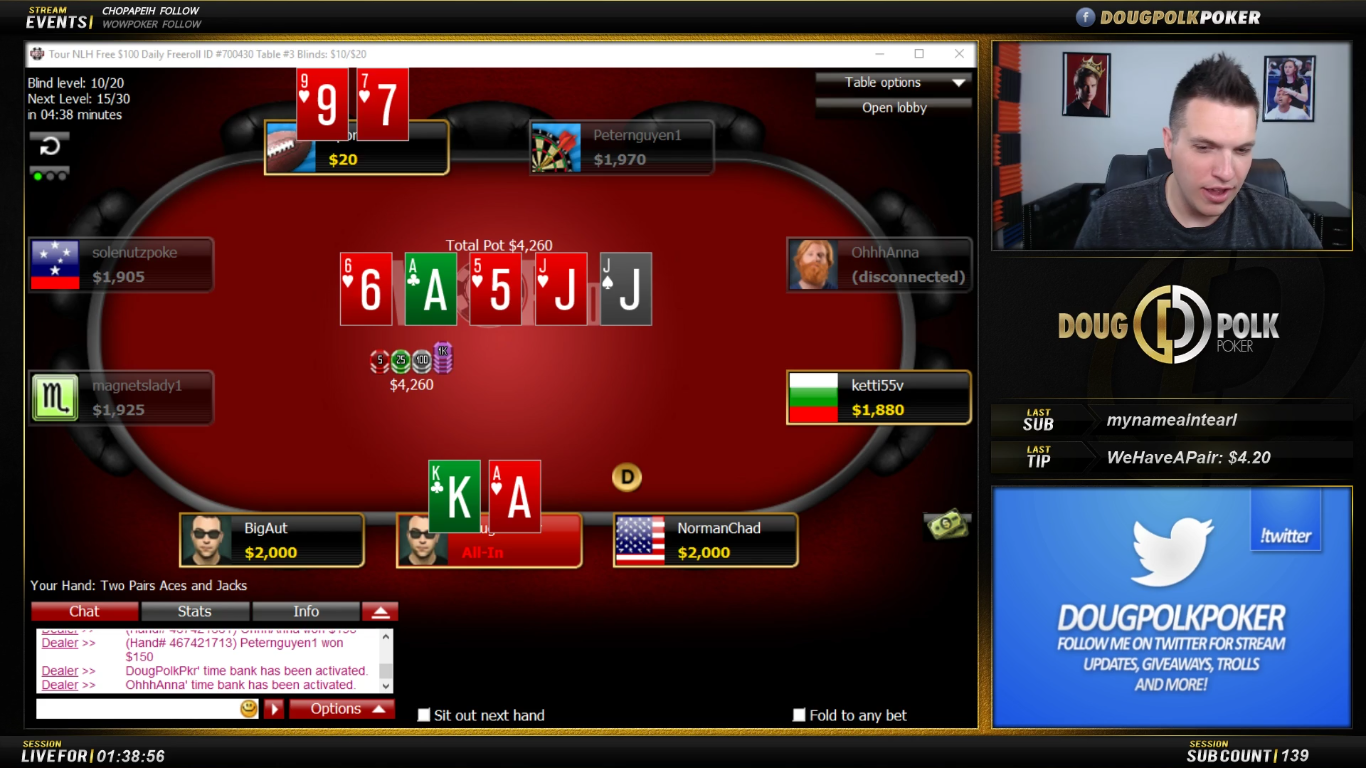 “I scheduled my whole day around this tournament.”

Someone in the chat asked if Doug used the Postflop Engine himself. Doug explained that the engine is not for players like him.

The Postflop Engine is an introduction to thinking about how play poker correctly. Doug created it as a way to learn how to play the game in a simplified manner.

Almost 2 hours into the stream, the bankroll was holding steady around $153.

When someone pointed out that the bankroll challenge is on pace to take a very long time, Doug’s answer was simple:

He was asked about his bankroll strategy and the reason he stopped playing cash games for the challenge. The rake in tournaments and SnGs is a mere entry fee, while in cash games the rake is much higher. Plus WSOP.com has an SnG leaderboard rewards, which provides great value to those on the top.

After hearing a bad beat story from someone in the Twitch chat slow playing Queens, Doug offered a simple tip:

“Don’t ever slow play Queens preflop. If you want to slow play something, slow play Aces.”

Doug’s momentum slowed around the two and a half hour mark. He mentioned that busting from all his remaining SnGs would bring him down to break even on the day.

A Twitch chatter complained about the lighter-than-usual 2 day a week schedule. Doug wants to keep the content flowing across all platforms, and streaming twice per week will keep him from burning out.

Doug busted out of his final SnG of the day and pulled up the cashier window. After a 3.5 hour grind and a few near misses, the bankroll ticked up to $150 (30 cent hourly, holla!)