Day 15 of Doug Polk’s 10k Bankroll challenge showcased the first winning session since day 13, when his shot on the heads up NL20 cash game tables backfired.

For this session Doug decided to six table, up from his usual four table streams. The result was a hell of a Twitch stream, with action pots being played on screen at any given moment.

Eventually all the tournaments were either cashed in or busted out of until there was only one final table left. Doug played against his possibly robotic opponent for almost an hour, until finally taking down the last tournament of the session.

Time to Retreat and Adapt

Doug welcomed the Twitch audience to the final twitch stream from Las Vegas until he comes back from Canada in October.

Doug decided to play mostly sit and goes for this session. He explained that he had been working on his SnG strategy, and realized a few things he had been doing that were affecting his win rate.

This is the first time in Doug’s life that he’s extensively grinded sit and goes, and after analyzing his game, he found leaks even without the help of tracking software.

The action started with a few $1 sit and goes and a $2 tournament.

Answering a question from the chat, he confirmed that he will be streaming at least 3 days a week for the WCOOPs. He wants to avoid burning out, like he did while streaming the SCOOPs (Spring Championship of Online Poker) every single day of the week.

He decided against a Twitter Strategy Q&A for his last session before the WCOOPs, as he wanted to keep it short, however he did answer some questions from the Twitch chat.

When asked to describe how well he has been running from a scale of 1 to 10,  he answer candidly:

‘‘Around even in buy ins and whatever, hot in tournaments but a little cold in sit and goes. But we are running bad over all in that our big shot session we got massacred. Obviously when I play heads up no limit my expected value is not to lose 12 buy ins.’’

By the first hour he added a daily freeroll to the mix, and was now on a sick seven-table grind. 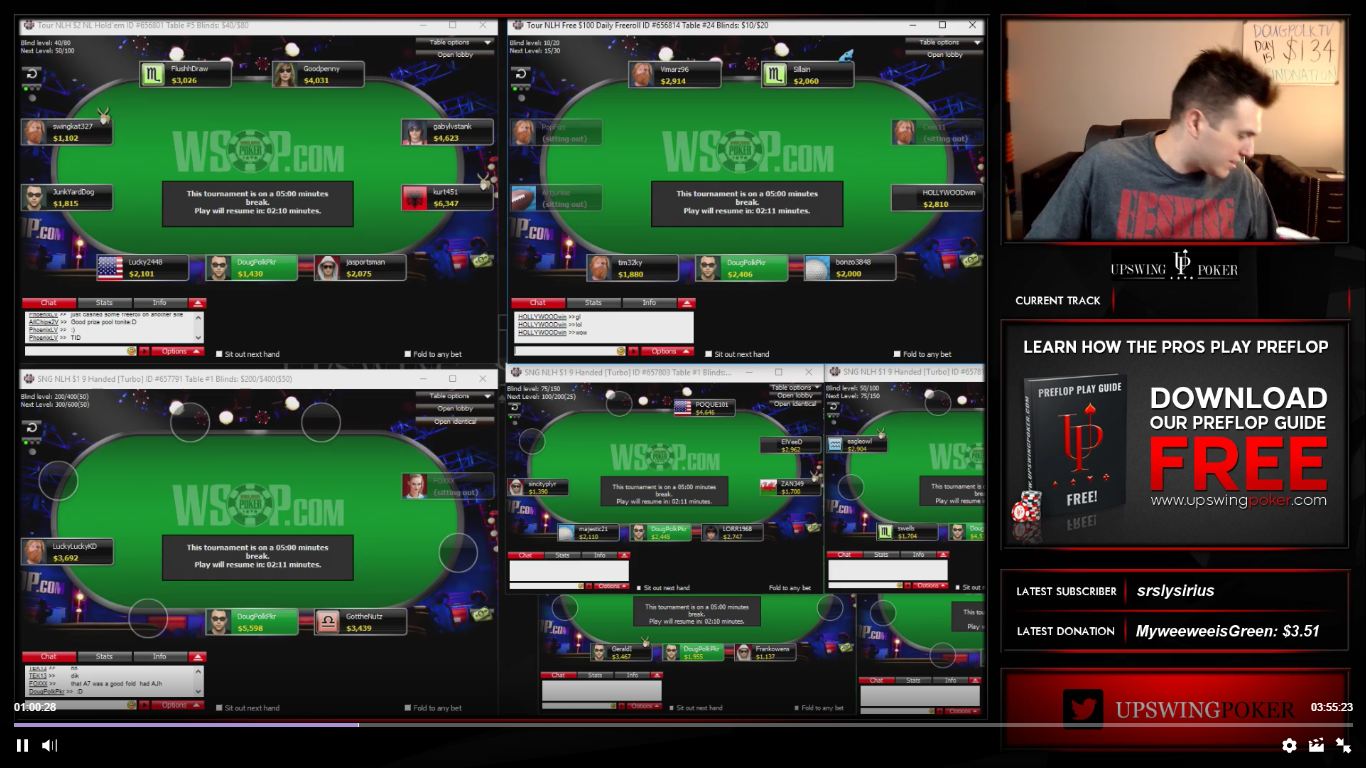 There was an extended period of time, right after Binks (Doug’s dog) came on screen, where the session was muted. Due to the delay, there was nothing he could do about it until the chat caught up to him. Doug still has no idea why this keeps happening as it apparently has nothing to do with the mute button. Theories range from a software bug to Binks having secret puppy-antichrist powers. 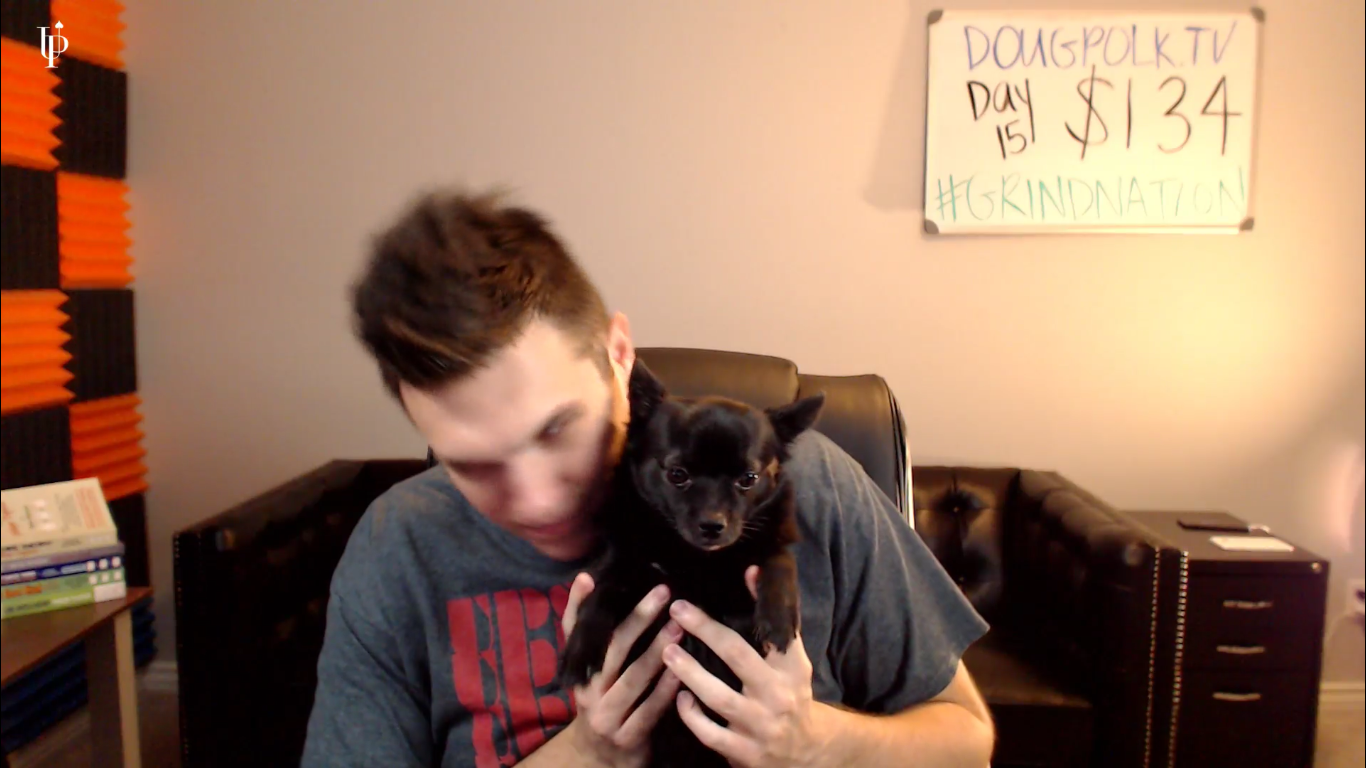 Half an hour later, Doug’s time to introspect and work on his Sit and Go game was proving to be fruitful. He had cashed in a majority of the seven tables he was playing.

After a short while he was only showing three tables, two of which were SnGs accompanied by a tournament, and was heads up in both of them.

Doug once again took a moment to express his love for heads up, even though he had been losing most of his heads up matches thus far.

Doug explained to his audience why he won’t take anymore shots after his NL20 experience. It boils down to not wanting to ‘‘have to go to Two Plus Two and explain why [he] lost $300.’’

Two hours into the stream, Doug found himself eight-tabling

For Doug Polk, all the leaves are brown and the sky is grey.

Throughout the session, Doug reminded his audience that he was itching to go back to the high stakes after 16 days of nothing but micros.

Poker is poker, regardless of the stakes, but the real dream is being on a grand stage, playing for more prize money than what most would see as a yearly salary. It’s an itch that a WCOOP final table would scratch real well. 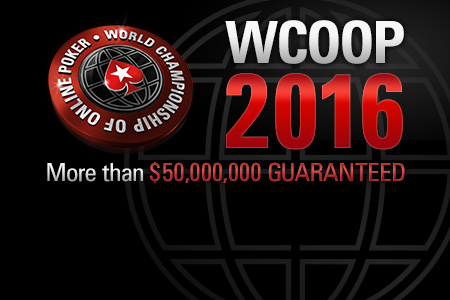 Two and a half hours into the stream, Doug was positively in love with his new Sit and Go strategy. He plans to just do the same and grind sit and goes when he comes back from Vancouver. The Bankroll now stood at $135.

An hour later he entered and busted out of the big buck, after nursing the short stack for about half an hour, Doug finally lost a flip. It was fine, however, as there were still a ton of sit and goes to go through before the session was over. 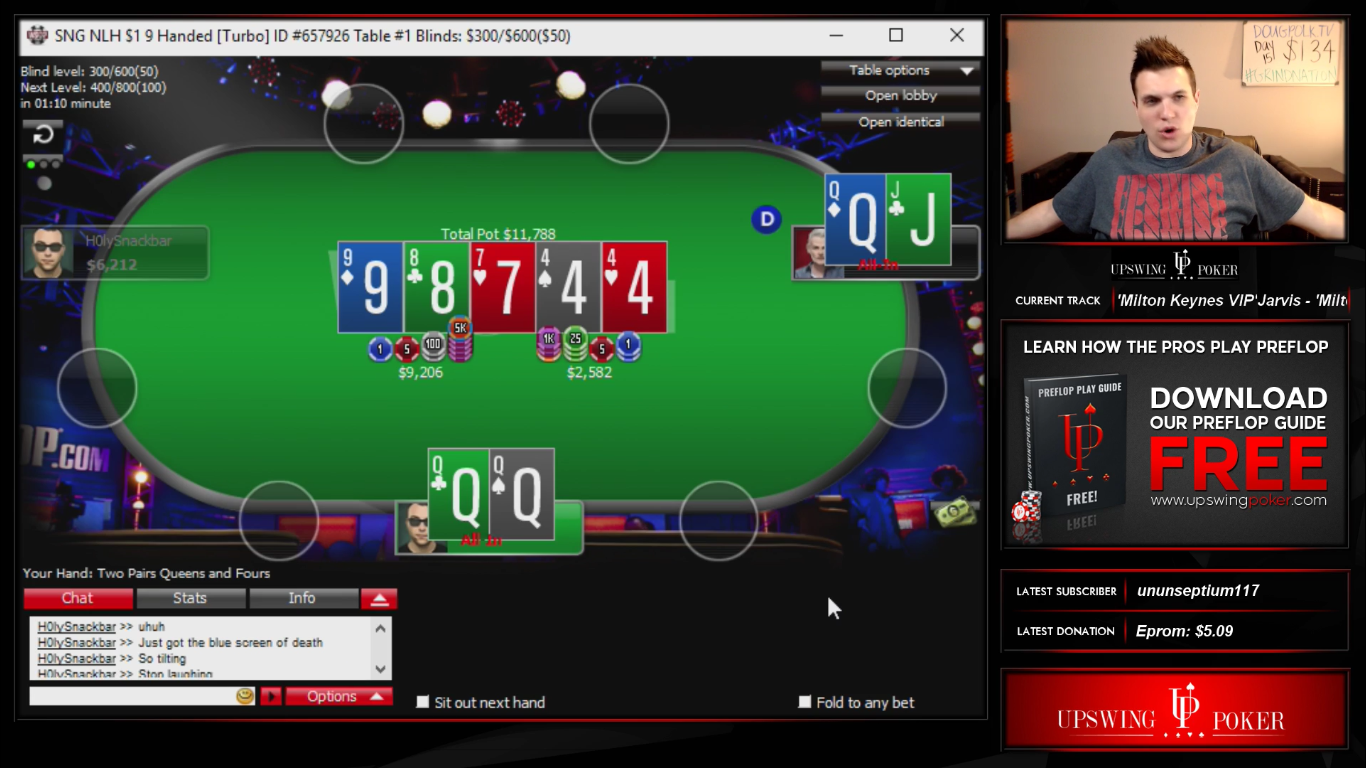 Looking Back On This Past Month

After a final win of the day against Twitch reg ‘‘HolySnackbar’’, Doug reflected on the past few weeks.

At the end of the day, we took shots in games that I thought were good. The heads up session was definitely the best spot we were going to get, No limit heads up is my game. And we ran bad.

… In retrospect, given the community backlash, I wish I hadn’t taken that shot. But I can man up and accept that I did take that shot and it was my choice to make.’’

Doug continued outlining his strategy for October. He will take a slower approach to the bankroll, recognizing that the first 1K is the hardest to reach. He promised his audience that he will take a few shots, but none as aggressive as the last one.

The bankroll now sits at $137, where it will remain for all of September. Doug is on a small winning streak, but a winning stream nonetheless. See you at the WCOOP!