Let’s Get Back On Track – Bankroll Challenge Day 14

13 is known to be an unlucky number, and Day 13 of Doug Polk’s Bankroll Challenge lived up to the superstition and brought a downswing with it.

Instead of playing tournaments and avoiding cash games like he strategized, Doug decided to take a huge shot with the bankroll. He hopped in some Heads Up NL20 cash games including one against WSOP bracelet winner, Reddit r/poker moderator and all around great guy Ryan Laplante.

Though Doug seemed to be having a real good time, the bankroll took a sizable hit, spiraling from $407 to start the day all the way down to $138. Laplante was one of the largest benefactors.

Sun runned hard vs @DougPolkPoker and beat him for about $100 playing a mix of 20nl and 10nl hu. Won all the flips and had the coolers. ggul

Doug started the day explaining why he decided to change the name of the channel from UpswingPoker to DougPolkPoker.

The stream was started by two streamers, featured Upswing Poker coaches Ryan Fee and Doug Polk himself, with the sole purpose being to promote the site.

Over time it became clear that two rotating streamers was not the most effective way to use Twitch. Since Ryan was pretty much done with it anyway, Doug took over as sole streamer.

After a few months of ‘Upswing Poker’s Twitch featuring Doug Polk’, he saw another problem.

‘‘I really need something that represents me, not the company that I love and own. The man, not the business.’’ He explained. ‘‘This channel has come a long way, we are no longer just promoting, we are trying to do something with my name, my brand.’’

He also thought that there were too many advertisements for the Upswing Poker Lab and wanted to correct this.

All of the subs and followers transferred over, so you can change your bookmark accordingly.

Lastly, he reassured his audience that he will still win the bankroll challenge despite the day 13 setback.

Doug’s still confident that he had a sizable edge and he is cool with taking that shot, but wishes he had thought about the community reaction before taking it.

Even though he can take the losses, he admitted that it’s bad marketing to lose so much of his bankroll taking such a risky shot in a bankroll challenge.

Back to his usual bankroll management strategy it is! 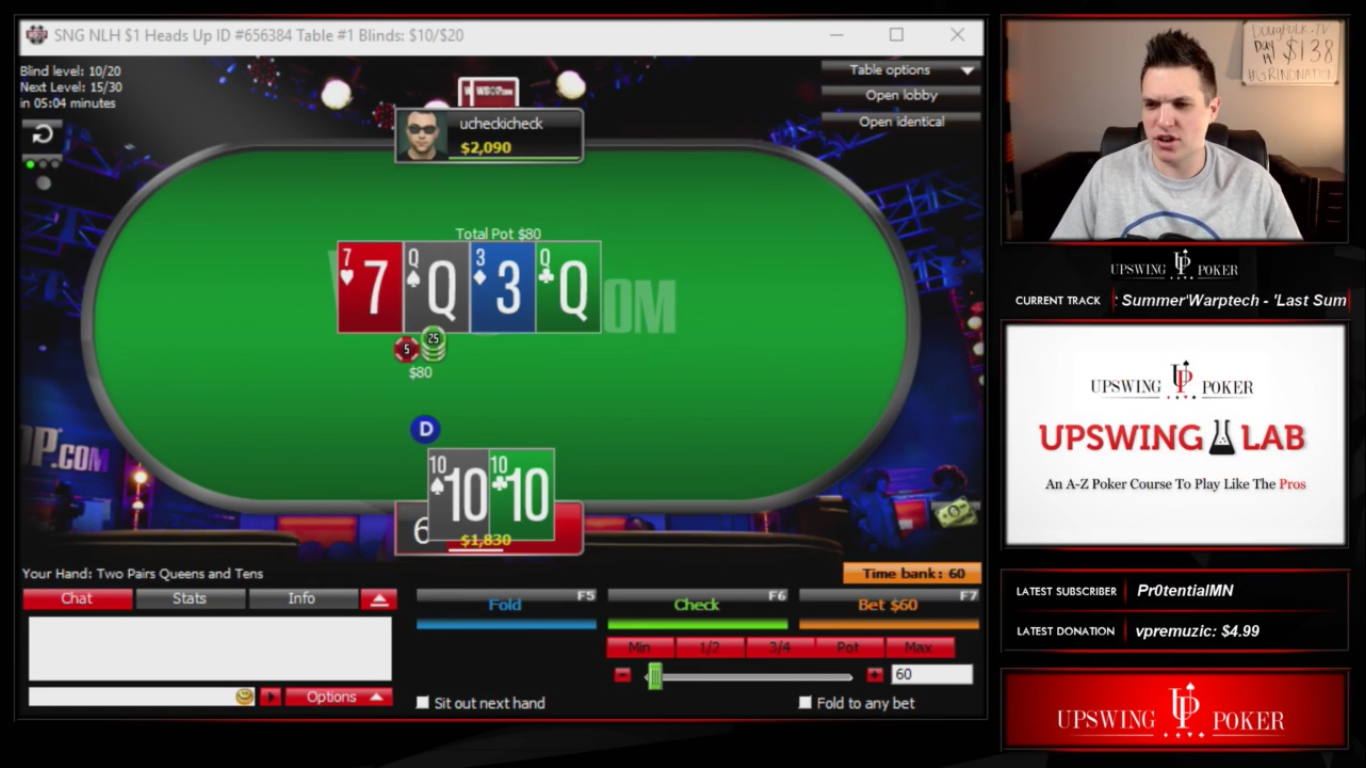 We started day with a $1 Heads Up Sit and Go, followed swiftly by a $1 9 handed SnG.

An hour and a half into the stream, Doug had his first cash of the stream, getting second place in the $1 SnG.

Doug also announced his schedule for the week before WCOOP (World Championship of Online Poker).

There are only going to be 3 streams this week, as he needs to prep and change accommodations for WCOOP.

How to Have Poker Idols

Two hours into the stream, he took a 5 minute break from the grind to answer some questions from the audience. Doug confessed that he just likes to play poker and that losing at NL4 feels just as bad as losing at NL5K.

When asked about his ‘‘poker idol’’, he said that he didn’t look up to anyone in particular coming up in the game, but then remembered ‘‘Adz124’’. Doug used to watch Adz124 play $25/$50 every day and was impressed and shocked by the amount of money he was playing with.

‘‘It made me feel a little bit sick, even thinking about how much money that was.’’ Times sure do change.

Doug advised his audience to remember that poker players are humans too. Try not to look up to the person but rather the things they do and the way they play, it will help you avoid being disappointed by their flaws.

Two hours into the stream,  Doug was playing a mixture $1 tournaments, $2 tournaments and freerolls, including the Upswing Poker freeroll. He dipped as low as 500 chips in the Upswing Freeroll, but managed to grind it back to a comfortable 13k stack by the third hour. 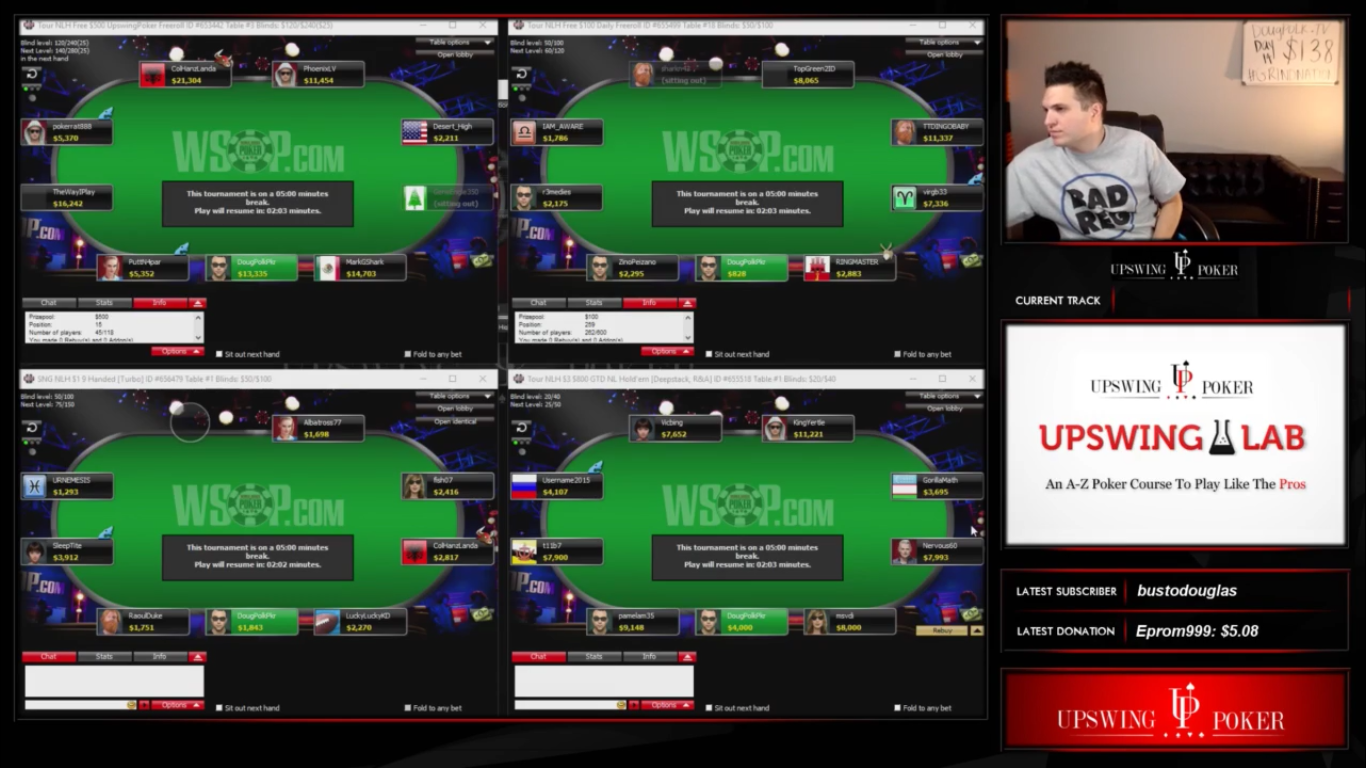 Early in the third hour, Doug added a few more tournaments to the mix.

Despite not showing profit, one could tell that this session was going much better than last one. Doug was more relaxed as he joked back and forward with the chat while grinding the Upswing Poker freeroll.

Doug eventually finished 15th and won $8, the winner will walk away with $135 and a free Upswing Poker Lab.

After busting out of the big buck in the fourth hour, he added 9 handed sit and goes and three tabled his way through the fifth hour.

At this point the bankroll was down but not terribly so. Doug’s strategy of only playing tournaments and SnGs in the micros has proved to be a successful one.

Feeling confident in his heads up game, he added a super turbo HUSNG to the mix. He won two times in a row against ‘H0lySnackbar’. 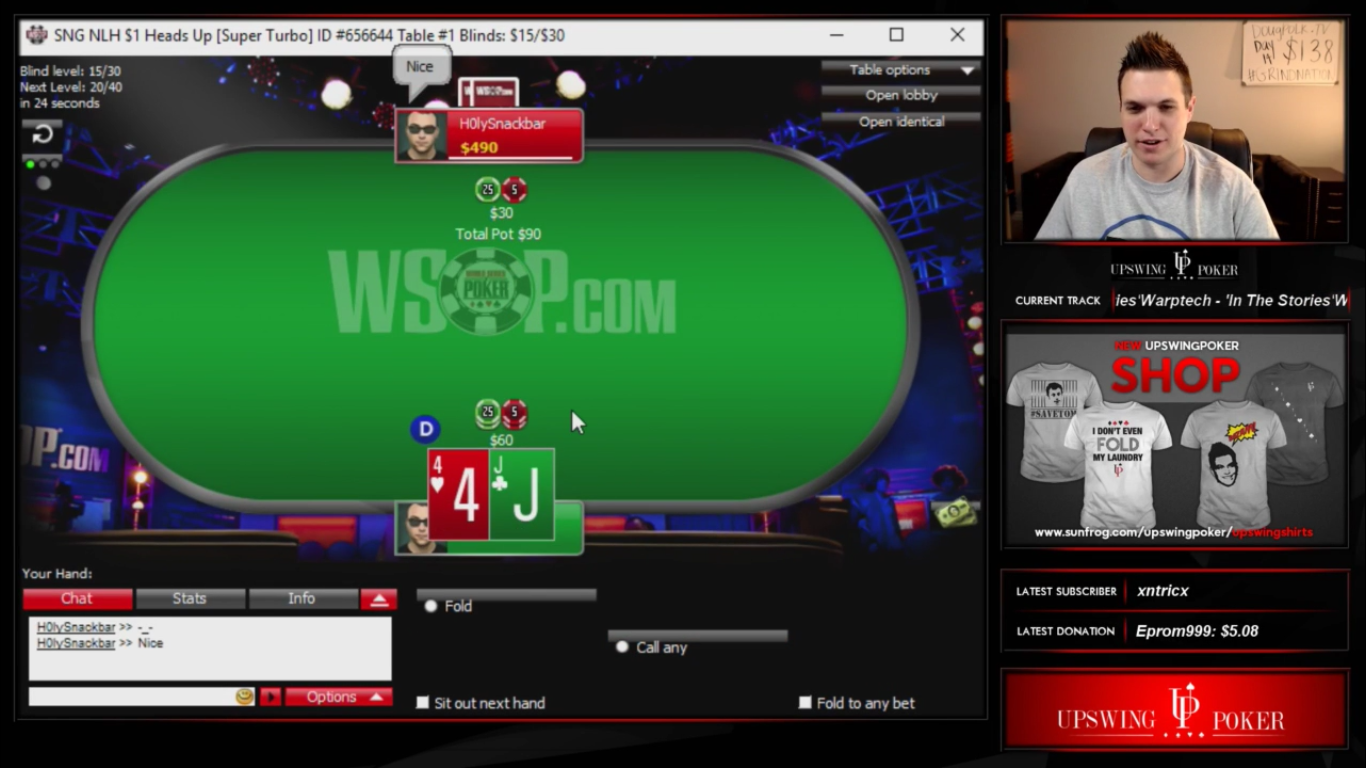 Once again, Doug proved his love for Heads Up No Limit, being ecstatic and enthralled with his $1 Heads Up sit and go, though he still had money to win in the 9 handed sit and go. Soon, he reached heads up and it gave his audience double heads up action to end the session.

Doug went 1-1 in the matchups, busting in 2nd in the 9 handed while beating H0lySnackbar one last time. The bankroll ended the day at $131.