My name is Doug Polk. I’m in charge of strategy here on the Upswing poker team.

These are the strategies I’ve spent years developing to get me to the top of poker. Rather than browse the web and shift through the abyss of poker strategy we’ve assembled all the good stuff, right here.

I’ve played games my whole life. My online screen name “WCGRider” comes from the game WarCraft 3 where I participated in the national qualifier for the World Cyber Games.

My parents raised me without rules and always taught me to think and decide for myself. I happen to be the kind of guy that is dedicated to success, so I would pick something and focus my energy to make that happen.

At 18 I found poker and started playing obsessively. I started out with only a $20 bankroll and played very low stakes.

Things weren’t always easy. In fact back in 2007 I was on the brink.

It was at this time when I met Ryan Fee and we became good friends.

At 19 I decided that poker was something to pursue full time. I dropped out of college and moved to Las Vegas to pursue my passion.

Eventually I fully graduated to heads up. I focused on that for a couple years, taking on all comers. Eventually I was out of opponents to play, except one: Ben Sulsky.

At the time Ben, AKA Sauce123, was considered the best player in the world. I looked at his game, and while I thought him to be a tough opponent, I thought I had an edge. I won in convincing fashion.

After my victory over Ben in 2013, I had reached the pinnacle of the game. Players were resistant to play me. Occasionally I still got action, sometimes all the way up to $400/$800, a game with a $120,000 buyin, the biggest online.

I decided to seek action else where.

Our approach to poker is unique in that that we can easily apply the skills from one game to another. I was already a big winner in Cash Games, with some due dilligence I was setting my sights to do the same in tournaments.

Beginning in 2014 I started playing live tournaments. After hard work and a long year and a half of grinding I have to date had over $4,800,000 in tournament cashes. Additionally in 2014, In just my first year of playing a large slate of tournaments, I won my first ever World Series of Poker Bracelet. In 2015, I set my eyes once again on a new challenge. Carnegie Mellon, a Leading University in Artificial Intelligence and Machine Learning offered me a challenge: To play their heads up poker bot for 20,000 hands.

I took on the top computer program in the world in the game that was my stomping ground, Heads Up No Limit Texas Hold’em. This challenge was going to be a giant experiment in Artificial Intelligence and I was going to be on the forefront to help its development.

It was a grueling two weeks, playing eight hours a day, all streamed live on twitch. At the end of it all the humans prevailed. The computer was no match for us and I lead the way to a large victory for humanity.  They might have taken over chess, but we still have a fighting chance in poker! “Man, this guy just never seems to go on tilt…”

I would say I am one of, if not the, most distinguished Poker Players in the world. My resume proves it and I’ll be sharing it right here on Upswing Poker.

I Grew up in Philadelphia. In 2006, After watching the WSOP on television I decided that poker was exciting and worth pursuing. I was a senior in high school at the time. I went to the bookstore up the street after school and started reading.

Eventually I discovered the community of online poker players. Back then information was scarce and scattered. I really wanted to learn from A to Z an introduction of how to approach the game.

I learned what I could and started playing $.1/$.25 No Limit Hold’em Cash Games with a $300 bankroll. I focused 100% of my energy on poker. I would wake up and grind an hour before school, surf poker forums all day in class, come home and play poker until I went to sleep- every, single, day.

In the course of the year I had moved up to $2/$4 and had a low five figure bankroll. I was so grateful that I decided to give something back. Like I said when I first started playing I really wanted an introductory guide- what’s going on here and how do I start? Over the months leading up to 2008 I started writing a  book and released in early the next year, for free. It was an introduction to poker strategy and everything anyone needed to know to get started. The information is definitely dated, but you can check it out here.

The next year I went to college.  I was completely absorbed in poker and saw no reason to do anything else. I took a leave of absence [which I am still on ;)] and pursued my passion full time. I had sort of gone all in on poker so I dedicated 100% of myself to succeeding.

I was thrilled. I set out to achieve a goal and little by little, succeeded. Nothing could prepare me for what happened next though…

I flew down to Costa Rica with some friends for a vacation to cap off a great year. Pokerstars was hosting a LAPT tournament down there, a tournament which I didn’t even intend to play.

Luckily the hotel we were staying at was land locked and there wasn’t much of a beach to go relax at. I decided I might as well play the tournament as all of my friends were. I won the tournament, knocked a huge item off my bucket list, and doubled my bankroll all in one fell swoop.

Afterwards I treated my friends to a vacation in a resort down in the jungle in Costa Rica. The next year I moved out to California to play online, learn and grow.

Over the next five years I moved around between California, Las Vegas, Vancouver, Mexico, Australia, and Asia playing online poker at the highest stakes.

In 2014 Doug talked me into playing live tournaments. He said there was a ton of value and we couldn’t miss out.

As usual, he was right… I went on to cash for over $2.5 Million in tournaments that year.

Now I am finally starting what I really set out to do back in 2008- creating a comprehensive explanation of what poker is, how it works, and just simply whats going on here.

Doug and I will be showing you how we see things in everything from poker strategy, tournaments, news, and the general goings on of the gambling world as a whole. Being a true gamer at heart, when I found Poker – it was love at first sight.

However, my  first year playing poker was pretty rough… I would hold my own in  small stakes home games with friends, but always ended up losing my deposit when I took my game to the tougher online poker sites. (I know lots of you can relate)

But there was always a belief deep down, that there must be some way, some method, by which I could make consistent profits playing poker…

Here’s how…  I found a community of pro poker players at online forums and other poker educational resources. My eyes were opened to real poker strategy. It was at this moment poker went from a hobby to a career.

I was able to pay my way through college, and make a few million dollars over the last 10 years. (Don’t even get me started on taxes..!)

My goal here at Upswing Poker is to help transform at least one hobbyist poker player into a self made millionaire. 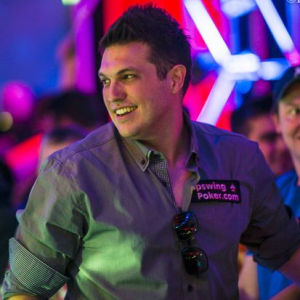 I have over $5,000,000 in live tournament winnings. In 2014, I won my first World Series of Poker Bracelet, followed up with a 2nd bracelet in 2016.
My online winnings are over $2,000,000 on Full Tilt and PokerStars alone, mostly at Heads Up No Limit, and those graphs are publicly available on HighStakesDB.