If you are not following Upswing Poker on Twitch, then you are missing out! In every stream, Upswing Poker coach Doug Polk gives out great online poker strategy tips, with a touch of community interaction and a whole lot fun.

But that’s not news to someone who is familiar with Doug Polk’s work. He has a unique way to give out the best poker coaching packaged in fun lessons and anecdotes.

To show you what you are missing, we’ve compiled a list of the 7 best moments in Doug Polk’s poker Twitch stream. 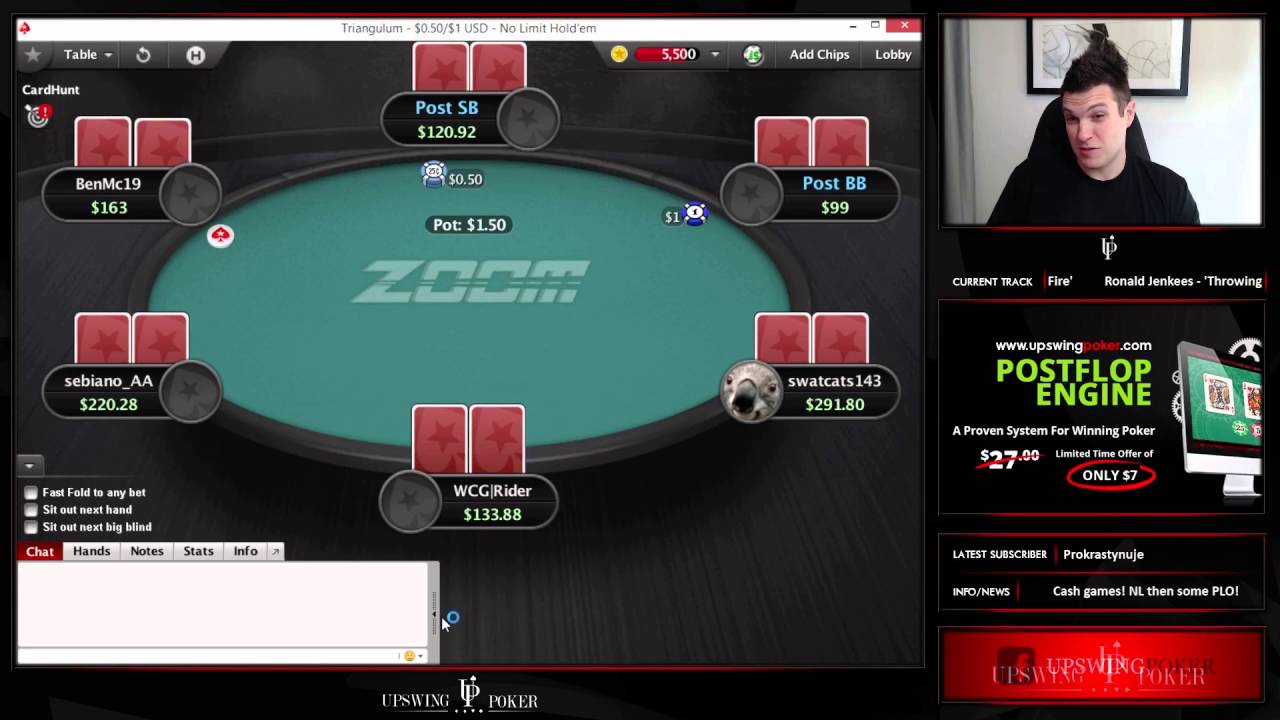 As covered before, Tom Dwan sometimes runs into a bit of trouble in Macao. According to Dan Cates, one such trouble once found him in the losing end of a 20 million dollar pot, which in this video Doug corrects as actually being 30 million.

And remember, this story is completely 100% true and actually happened.

#2 – Doug ‘WGCRider’ Polk vs Parker ‘Tonkaaaa’ Talbot In THE CAGE 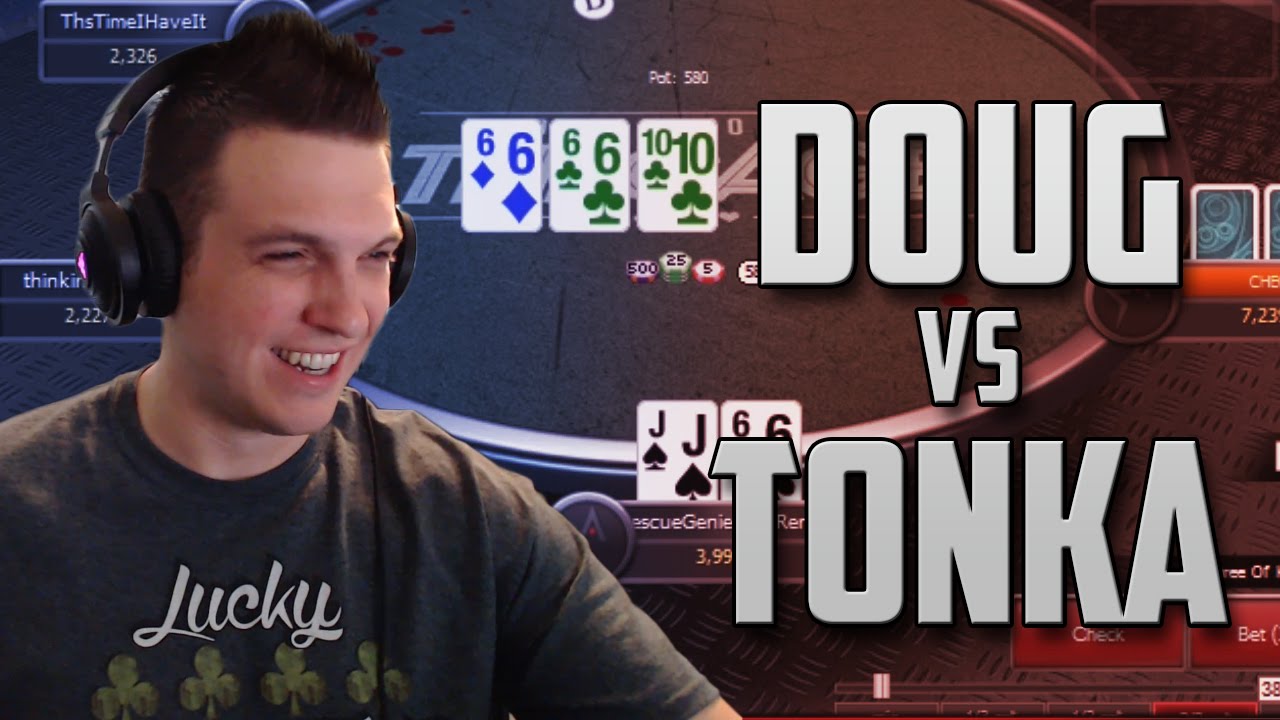 Well, it turns out it’s also up Parker ‘Tonkaaaa’ Talbot’s  (KKtexasdollykk) alley as they faced each other in this crossing of the Twitch streams.

They met each other in the final table, of all possible tables, with Doug flopping trip sixes. Tonkaaaa called his bets all the way showdown where he revealed a pair of aces, losing the pot.

It reached a sick climax when Talbot jammed with pocket nines right into Doug’s pocket tens.

#3 – Traversing a Minefield with King High

So as it happens, Doug Polk was playing a $5,000 Heads Up Sit and Go on his Twitch stream.

Effective stacks are $794, he gets dealt King of spades and 3 of hearts and limps in, trying to see a cheap flop.

Doug tells the Twitch audience that he is going to give it up on the river, but this is followed by a silence instead of a fold.

Just to clarify, this board has four to a flush and three to a ten to Ace straight. And even with this board all his opponent really needs to take the pot is an ace high or above.

Doug finally calls and his opponent shows… a deuce and a three. King high is good! 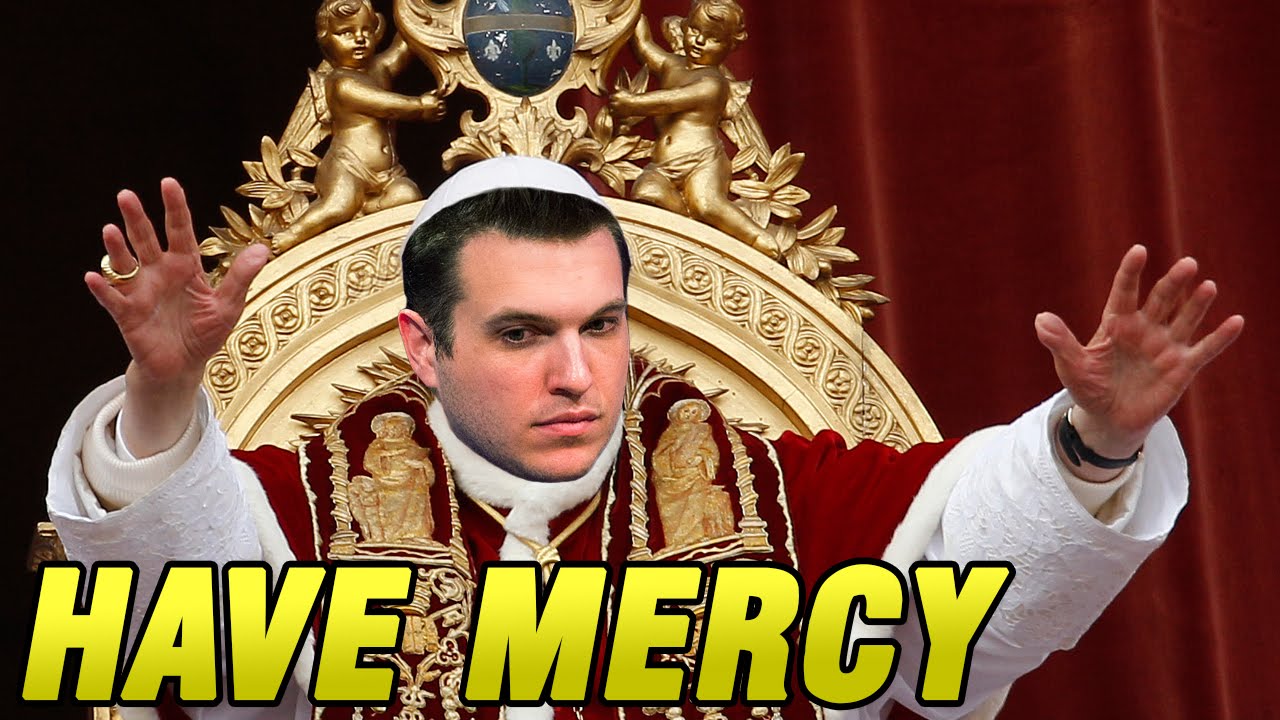 Another heads up hand, this time PLO. For this hand in particular we don’t know fully what Doug has until the last few moments of the hand.

Finally the river comes and it’s a four of diamonds. The relentless opponent bets the pot again, and Doug finally shows us his hand: He’s got aces, hearts and diamonds, with a three-two of diamonds. After a moment thinking about, he finally calls, driving the pot to $16,182… And his opponent was bluffing! The Aces were good!

‘‘I love Aces!’’ Doug screams, and with pots like that, who wouldn’t?

BONUS – Doug turns the world in another massive PLO hand 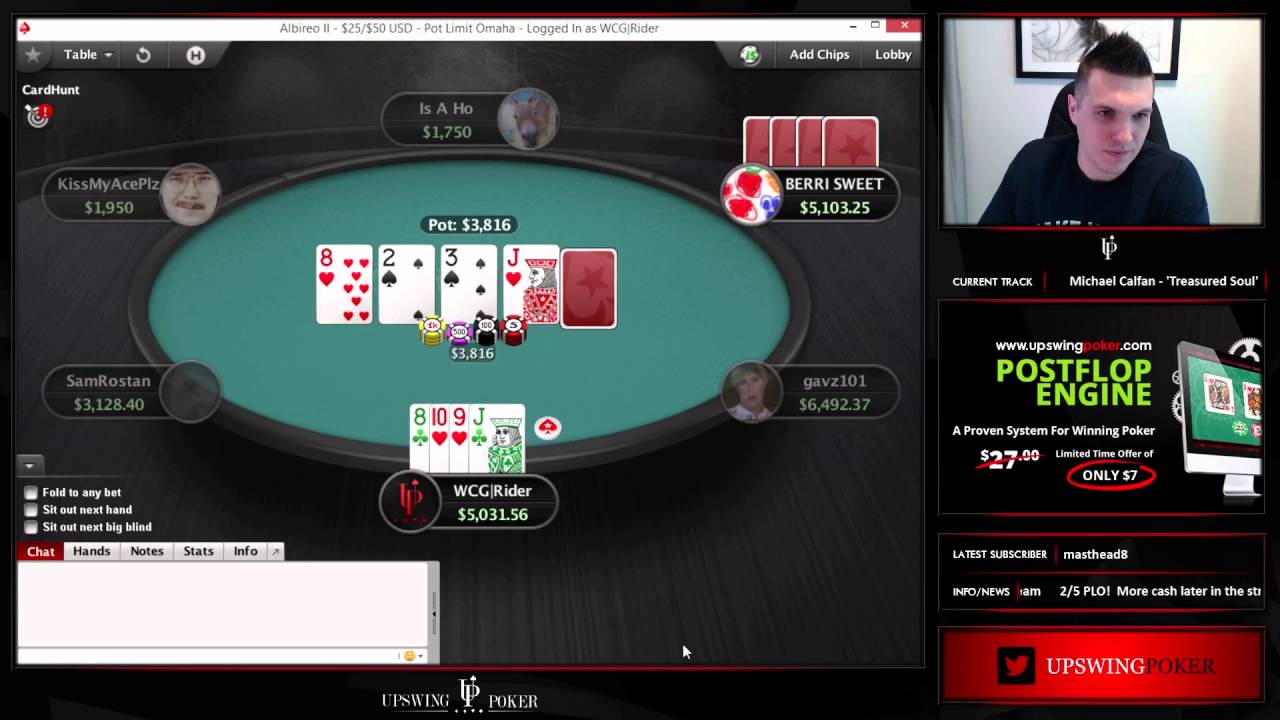 The WSOP $1,000 Tag Team No Limit Hold’em event was celebrated in Vegas this past July. It was a new format in which players can literally ‘‘tag in’’ someone of their own team to play in their place after they are done. Similar to a wrestling match.

The topic came up in the stream and Doug Polk and Ryan Fee had a few choice words about it.

Doug looks at Ryan with an incredulous look and asks…

After making fun of the event some more, Doug actually came up with a strategy…

Doug Polk: “We should just like post up, and get a massage chair and a massage girl there. And then whoever’s not playing is getting their massage next to the table.”

You know what? They are right. That’s a pretty silly gimmick for a tournament. Say, who ended up winning that mess anyway? As you probably have heard, Doug and Ryan went ahead and won the tag team event.

The experience of actually playing the tournament changed their minds radically. In his exit interview, Ryan Fee said he would play way more tournaments if they were ‘‘more like this’’. Meanwhile, Doug, who had earned a bracelet before,  later said that  “this tournament is maybe even the most fun of any event I’ve ever played.”

Their experience teaches us a lesson on judging tournament gimmicks too harshly, too fast.

Doug Polk bested a field of 1,452 players in the “Kilimanjaro” for a first prize of $162,000. A Tournament in the Pokerstars’ Mountain series, it was $700 to enter with a $750k guaranteed prize pool. The field included Fedor Holz, “Crazy Elior”, George Danzer, Justin Bonomo and Randy Lew.

Once he reached the Final Table, Doug decided to live stream it, announcing it with a Tweet and the result was one of his best Twitch streams. Let’s go over some heads up highlights.

Even after almost thirteen hours of play, Doug seemed really confident and relaxed when the Final table reached the heads up stage. He casually joked on the huge ROI he will receive for a relatively small buy-in just before the final hand.

In the last hand, effective stacks are $1702,610. Doug got King-Jack of spades in the big blind. His opponent ‘‘bebaimis777’’ raised to 110,000 from the small blind. Doug answered with a three bet, hoping his opponent would go all in, which he did, revealing a king-ten of hearts.

Doug flops a flush draw and an 86% chance of winning according to the PokerStars inhouse calculator. A ten could still save bebaimis777, so Doug and company scream ‘‘Hold!’’ once again.

The turn comes a brick.

Victory seems so close now, with the Pokerstars Calculator giving him an 89.9 chance of winning. The excitement is palpable as the river comes and Doug screams for it to‘‘Hold!’’ one last time.

The river finally comes, and it’s a six of spades, giving Doug an unneeded flush but a much well recieved $162,000 win! The largest score ever recorded on a Poker Twitch stream! That is… until it was broken by some dude named ‘‘SolidPenis’’ won a 250k Spin and go. Proving, once again, that the Internet is a soulless monster that feeds on dick jokes, and not even Online Poker is not safe from it.

After his amazing win, Doug and his friends took a moment to process the fact that he just won six figures in 13 hours, after only investing $700. ‘‘Should I play tournaments?’’, Doug tells us that he asked himself that morning. ‘‘And I was like, you know what? It would be the responsible thing for me to do. To play tournaments all day.’’

Hard to argue with him there.

Doug’s first Spring Championship of Online Poker title was done while streaming on Twitch. He entered the 43rd event, which had a buy in of $2,100 with one rebuy and one addon. The total prize pool reached over $500k.

UpswingPoker has covered his deep run before, so there is no need to go into too much detail for this entry. Needless to say, though, it was really amazing and you should check to see whatever material is still available from that great run.

For this entry though, we are going to check out the very last hand of the Final Table. 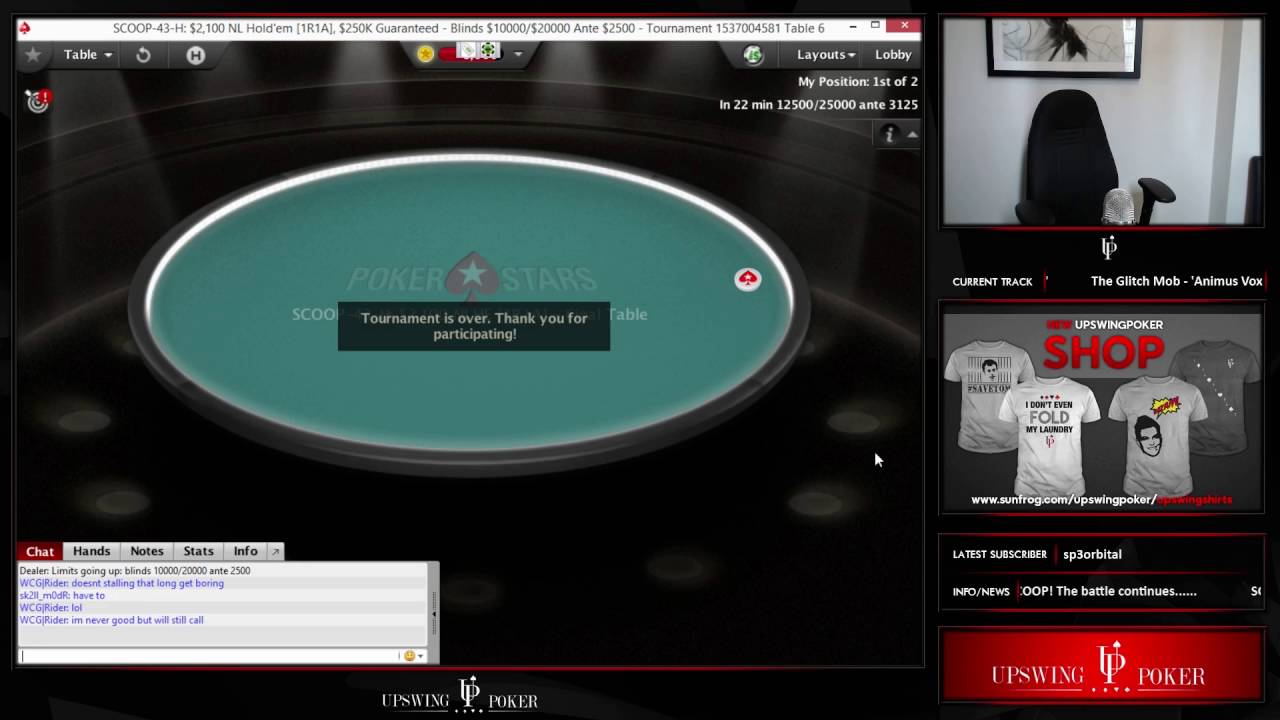 It’s been an hour of heads up play, the blinds are now at 10k/20k and Doug looks a lot less relaxed than what we’ve seen him in the past entries of this list. Doug is in the lead, but not comfortably. It looks as if he may have a few hours of fighting ahead of him, and then, he was dealt Jack-seven of spades in the big blind.

His opponent, ‘‘sk2ll_m0dr’’, opens from the small blind to 50k and Doug calls. Flop comes and it’s a Jack of clubs with a jack and nine of hearts. Doug has just flopped trips.

Doug announces a check raise to his Twitch audience, but his opponent won’t comply. It goes check-check and they see a turn, a ten of diamonds.

The river comes in and is a six of spades. Doug bets $525,000 and his opponent goes all in. Doug groans but decides to call anyway. His opponent reveals his hand, a bluff two pair tens and sixes. Doug Polk wins the SCOOP! And there you have it. 7 great reasons to follow UpswingPoker on Twitch.

You have more? Tell us which are some of your favorite Doug Polk Twitch moments in the comments.