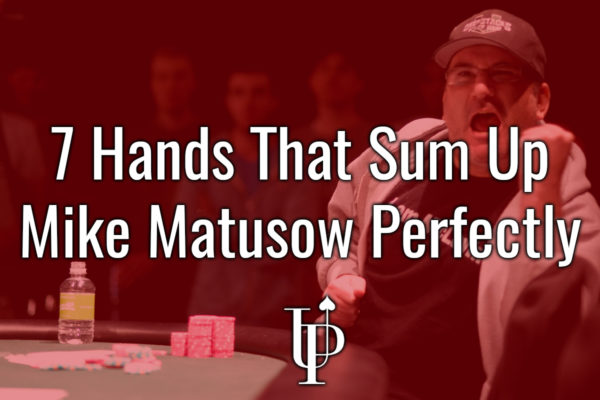 The name Mike Matusow brings a number of images to mind.

He is nicknamed “The Mouth” for a reason. This highly vocal, no-nonsense, sometimes arrogant pro has reaped considerable poker success. He has earned an impressive four WSOP bracelets and made several high-profile tournament final tables.

Mike Matusow’s colorful life is the subject of his tell-all autobiography, Check-Raising the Devil (2009) in which he details his rise to poker fame and struggle with drugs, incarceration, and other problems.

Get ready to take a look at 7 of the Mouth’s most notable hands after a quick discussion of his involvement—or lack thereof—with Full Tilt Poker’s sketchy pre-Black Friday operations.

Matusow was very vocal about the Full Tilt Poker fiasco courtesy of Black Friday which occurred on the 15 April, 2011 when the U.S. Department of Justice (DOJ) issued indictments against PokerStars, Full Tilt Poker, and Absolute Poker, the three largest online poker websites in the U.S. These organizations were charged with laundering funds from American players and placing over $300,000,000 of players’ funds in limbo.

Following claims of insolvency, a PokerStars bailout, and a lot of angry online players, Full Tilt Poker continues to leave a bad taste in many people’s mouths. Some of poker’s greatest players were implicated in this fiasco, such as Howard Lederer and Chris Ferguson who were on the board of Full Tilt.

Other poker pros including Phil Ivey, Layne Flack, Erick Lindgren, Barry Greenstein, David Benyamine, and Matusow himself were accused of owing exorbitant sums of money to Full Tilt Poker. This was a claim that Matusow has repeatedly and vehemently denied.

Matusow continues to be outspoken on this subject to this day, at the table, on television, and on social media, especially Twitter.

Of course, what would an article about Mike Matusow be without sharing some of his most entertaining hands? These hands sum him up perfectly and run the gamut from gloats to tantrums. Enjoy.

In this Poker After Dark hand, it is Daniel Negreanu who gives Matusow a taste of his own verbose medicine.

6. Matusow versus The Brat

Now we turn to the battle of the smack-talkers: The Mouth against The Brat (sounds like my kids, actually.)

Anyway, in this High Stakes Poker hand, Matusow’s mouth is running full tilt and it appears that Hellmuth doesn’t like being called a fish. When Hellmuth gets Matusow to fold his KK on the river—with nothing but a seven-deuce —and then proceeds to gloat in true Hellmuth fashion—Matusow claims he “knew it.”

Well, sir, if you knew it, then why’d you make that epically bad fold?

This hand exemplifies the roller coaster ride that is poker.

At the 2005 WSOP Main Event final table, Matusow’s KK faces off against Lazar’s AA. When a K appears on the flop, Matusow begins to celebrate but his exuberance is soon quashed when Lazar hits the nut flush on the river.

As usual, Matusow’s laments of being the unluckiest player on the planet ensue.

After Matusow jams the flop with an overpair, a devious Shaun Deeb goes into the tank with quads. When Deeb’s slow roll is revealed Matusow is insaned, claims to have never slow-rolled anyone, and threatens future bodily harm to anyone who slow-rolls him again.

While the authors of this piece cannot condone slow rolling under any circumstances we must concede it does make for compelling and entertaining television.

In this hand, Matusow flops a set of threes and proceeds to trap Hellmuth, who has no hand. In the end, Matusow gloats with, “I set him up like a dog, baby” and “Poker 101: How to school Phil Hellmuth. Film at 11.”

Matusow has another one of his patented tantrums during this hand from the Full Tilt Poker-sponsored Million Dollar Cash Game.

Seidel sucks out with running sevens, giving him the nearly $150,000 pot. As would be expected in true “The Mouth” fashion, Matusow is very vocal about his run of bad luck.

After proclaiming himself “Master of the Short Stack” in the 2004 WSOP Main Event, Matusow decides to shove all in with AK offsuite over Ed Foster’s raise with AQ suited. Foster calls only to see a dominating hand, but the river Q sends Matusow to the rail.

Matusow proceeds to storm off, throw his shades, and to top it all off, sits backstage crying into his hands while proclaiming how poker isn’t fair.

There you have it folks. The ups and downs of the always entertaining Mike “The Mouth” Matusow. While he is in fact a great player, perhaps he can invest some of his winnings in a good therapist. I wonder if Phil Hellmuth’s wife is accepting new patients?