Jump to a section: 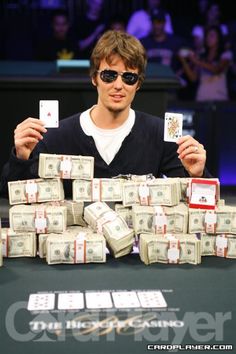 Take a look at Friedman’s entire history of tournament cashes at his Hendon Mob page here.

Prhalad Friedman’s confrontation with Jeff Lisandro in the 2006 WSOP Main Event is legendary in poker lore. Video of this incident can now only be accessed via PokerGO, and really is essential viewing for anyone looking into the history of the biggest poker event in the world.

The argument begins with Friedman alleging that Lisandro didn’t put in his obligated 5,000 ante, in a hand seen at the feature table in the late stages of the tournament. Friedman continues to press the issue for several hands afterward, escalating in a floor manager having to separate the two players. Lisandro famously threatened “I’ll take your head off” to Friedman, with things eventually settling back down.

Another big hand for Friedman came against Vanessa Selbst in the PokerStars Big Game (starts at 5:31):

This hand begins with Friedman three-betting with A♥A♦, against Selbst who opened with J♦7♦. Selbst picks her suited jack-seven as a candidate for a four-bet bluff, making it $13,200 to go. Friedman then five-bets to $35,000.

Selbst thinks it over for several moments and goes for the six-bet, raising to $106,200. Friedman then ships the seven-bet, going all in for $179,600. Selbst, anguished, is forced to call due to pot odds, and Friedman’s pocket aces hold up and he takes down the $340,000 pot.

Friedman also gave a bit of scathing commentary on a hand he wasn’t actually involved in from the 2019 WSOP $50,000 Player’s Championship:

In this Pot Limit Omaha hand, Shaun Deeb checks on all streets with pocket aces and the nut flush draw, even doing so on the river with a set of aces coming in. This prompts a stunned Friedman to comment that the hand is one of the worst he’s even seen played in PLO.

As a teenager, Friedman became interested in poker after his father won a local Lowball tournament for $11,000.

Before he was old enough to play legally, Friedman was sneaking into casinos to play. When Friedman attended university, he frequented the Oaks Club and honed his skills at $15/$30 Limit Hold’em games before taking on No Limit Hold’Em games at the Lucky Chances casino.

He developed a reputation for being a hyper-aggressive player and soon found that many wouldn’t play with him.

At this time, online poker was becoming quite popular.

Prahlad Friedman was one of the original online prodigies before such household names as Tom “durrrr” Dwan and Viktor “Isildur1” Blom entered the spotlight. While these top players were teething, Friedman was starring front and center at Ultimate Bet’s high-stakes NLHE tables where he made millions and was considered among the best in the world.

At this time, Friedman began to frequent Las Vegas where he met his now-ex-wife, poker pro Dee Luong (the couple divorced in 2013.) He credits Luong with keeping his spirits up during some of his low times.

Friedman played in the 2006 WSOP Main Event and finished an impressive 20th—outlasting more than 8,700 other players—and took home nearly $500,000. During this event, an altercation arose between Friedman and Jeff Lisandro about a missed ante that led to some bad blood between the two, a physical threat, and much criticism of Friedman.

He revisited the Main Event in 2010 and was involved in another incident, this time with an odd Ted Bort that revolved around a questionable clock call. Friedman was, again, criticized. This time, however, he was lucky to remain in the tournament but was eventually eliminated on Day 3 without cashing.

Victim of the Ultimate Bet Scandal

With his rapidly increasing bankroll from live tournament play, Friedman took part in some of the highest limit cash games available online—most of them through Ultimate Bet—where he rubbed virtual elbows with the likes of the Phils—Ivey and Hellmuth—and Doyle Brunson. During this time—completely unaware that his opponents could see his hole cards—Friedman’s confidence took a hit and his play suffered.

Friedman—along with Mike Matusow—was one of the biggest victims of the Ultimate Bet/Absolute Poker cheating scandal, having lost millions of dollars.

Understandably, eyebrows were raised when, in December, 2010, Prahlad Friedman announced he would be signing with Ultimate Bet. Many questioned how he could even think of aligning himself with a site where he had lost so much; however, Friedman said that he felt taken care of afterward, having been repaid some of his lost money.

Ultimately, in May, 2011, Ultimate Bet terminated Friedman’s—and ten other sponsored pros’—contracts. This came less than a month after the infamous Black Friday.

Prahlad Friedman’s raps, under the artist name Pragress, are the subject of many online poker message boards and YouTube videos. Opinions definitely run the gamut from Eminem to Vanilla Ice.

In 2005, Friedman rapped for a “The Nuts” segment during ESPN’s coverage of the WSOP circuit event at Harrah’s Rincon; for the 2006 WSOP Main Event; and for the poker site RakeBreak.

In September 2016, Friedman and hip-hop artist and current girlfriend Aida Leal Magalhaes released “Hazy Eyez” together. In April, 2017, they released the song’s EP track through Friedman’s Pragress Recors. Check out the official video from Pragress and Hazy Eyez here:

Friedman was a guest on Joey Ingram’s Poker Life Podcast in September, 2016 where he discussed his poker life (obviously), musical career and Pragress Records, love life, and pretty much anything else you’d like to know. Stick through to the end for some freestyle rap.

Geoff Fisk contributed to this article.